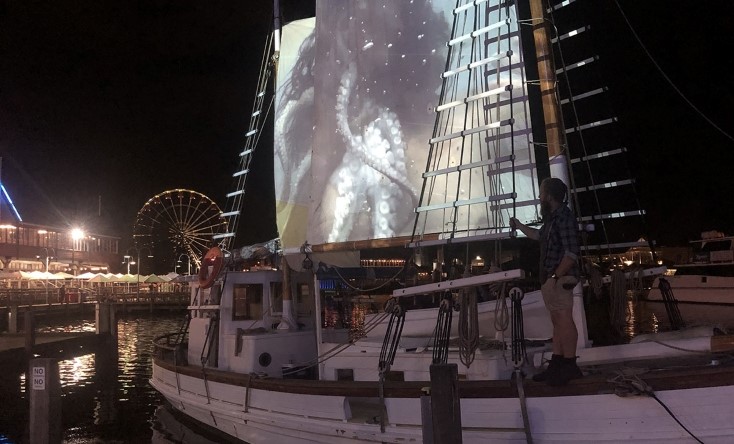 Five art projects were awarded funding in the City of Fremantle’s Arts and Community Grants September 2020 round. These grants are designed to incubate, support and develop Fremantle’s arts community. The next grant round will be held in March 2021.

An illumination of the past, bringing the dead to life; sourcing stories from Fremantle’s archives Vegas will produce three 40-minute immersive performances, integrating digital technologies, historical footage and live performance. This project explores our heritage, architecture, and the ever-popular genre of ghost stories; with narratives interpreted as a subconscious reflection of guilt, sorrow and unfinished business.
Project timeline: June 2021
Grant: $5000

For many Western Australians Ross Seaton was the ‘Walking Man’. A feature of the local landscape for decades, Ross pushed his wheelbarrow along Stirling Highway towards Fremantle. Collecting cardboard and other treasures on his way, he returned to his front yard in Nedlands to create extraordinary drawings and paintings. Ross Seaton: Walking Man will be a major survey exhibition of the work of an extraordinary Western Australian character.
Project timeline: December 2020
Grant: $5000

A new, artist-led Freo-based festival for those wanting a cleaner, greener, fossil-fuel-free world. This five-day, multi-arts event aligns with the City’s declaration of a climate emergency and its stand on reducing pollution and protecting our community from harm. Shaped by ideas and stories celebrating connection and respect for the natural world, this is a festival with a conscience.
Project timeline: March 2021
Grant: $5000

An intergenerational performance project facilitating knowledge sharing and the forging friendships. The Handover is a series of workshops culminating in a theatre production that navigates the way forward in a community looking to place blame for the state of our planet on the other generation. Project timeline: February/March 2021
Grant: $5000

A series of four musical installations, with music composed by artists Kim Batty and Jaydan Ahmat. Everyone will be welcomed into Art on the Move’s Beach St Gallery to celebrate original Indigenous music, with performances also accessible via livestream. Boodjar Beats seeks to broaden demographics and bring cultures together as we all step into the future.
Project timeline: February/April/June/August 2021
Grant: $5000