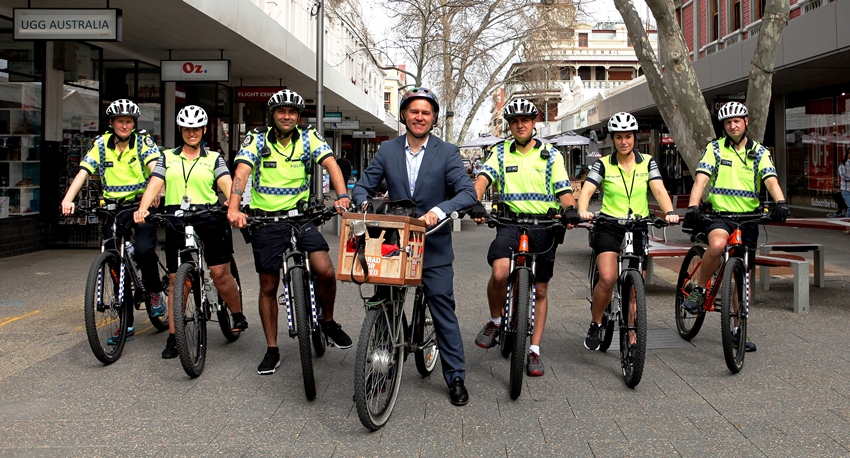 The new bikes – purchased from a local Fremantle bike shop – will be used to patrol streets and parks from 7:00am-5:00pm, focussing on the city centre and South Beach.

“With the bikes we can cover a much greater area and respond a lot quicker than we could on foot,” Mr Scanlan said.

“We can also get into the hidden and hard to reach places around the city that are difficult to access in a car.”

Senior Sergeant Brad Warburton from Fremantle Police said the joint patrols would further strengthen the partnership between the police and the City.

“The relationship between the City of Fremantle and Fremantle Police has never been stronger,” he said.

“Together we’re achieving some significant and positive results for the community.”

The new-look Community Safety Team, which was launched late last year, are the City’s first responders for low-level crime and anti-social or nuisance behaviour.

Eight team members patrol the Fremantle CBD and suburbs from 7am to 9pm every day of the week, and also respond to call-outs on 1300 360 666.

“We want people to come to Fremantle to enjoy all the great things we have to offer, so it’s really important they feel safe while they’re here,” Mayor Pettitt said.

Lighting upgrades in Princess May Park and Pioneer Reserve are also planned.

Find out more about the City's Community Safety initiatives.