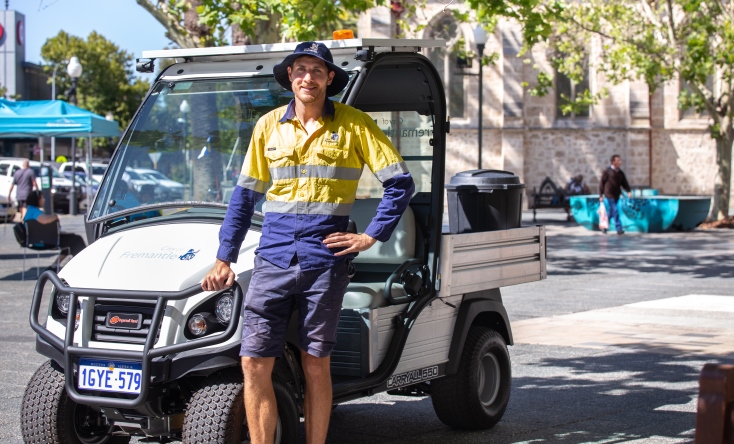 A new energy-efficient electric buggy has been added to Fremantle’s fleet of city cleaning vehicles.

The new buggy, which replaces an old diesel-powered buggy, will be used by the City of Fremantle’s clean-up team as they move around the city centre emptying the bins, picking up litter and cleaning up mess.

“Our new clean-up buggy has an in-built, high-efficiency battery charger for plugging into mains power, but it also has a regenerative braking system that charges the battery while it’s in operation,” Mr Tattersall said.

“It also has a solar panel on the roof for charging on the go, which reduces the amount of mains power required, reduces charging times and extends the life of the battery.

“This system means we get savings on electricity costs, savings on maintenance costs and reduced wastage, so the buggy is helping us to meet both our Zero Carbon and Sustainable Materials One Planet Living principles.”

The City of Fremantle’s city centre clean-up crew operates 7 days a week, from 6am-4pm Monday to Wednesday and 6am-9:30pm Thursday to Sunday.

The City also has a fleet of three street sweepers, and steamer truck and a water truck that hits the road at 3am to hose down and sweep the entire city centre on a weekly basis, with high-traffic areas like the Cappuccino Strip cleaned every morning.

The cleaning crew also sweeps the City’s entire suburban road network multiple times throughout the year, as well as taking care of other jobs like cleaning bus stops and responding to emergency clean-up events like traffic crashes and storm damage.

Introduction of the new electric clean-up buggy follows in the footsteps of the City of Fremantle’s recent trial of EVie the electric rubbish truck.

The City is currently reviewing the results of the trial to determine if it would be viable to add EVie to the City’s waste management fleet permanently.

Other energy saving measures introduced by the City of Fremantle include electric car charging stations at the Cappuccino Strip car park, energy-efficient LED street lights and solar panels on most City buildings.