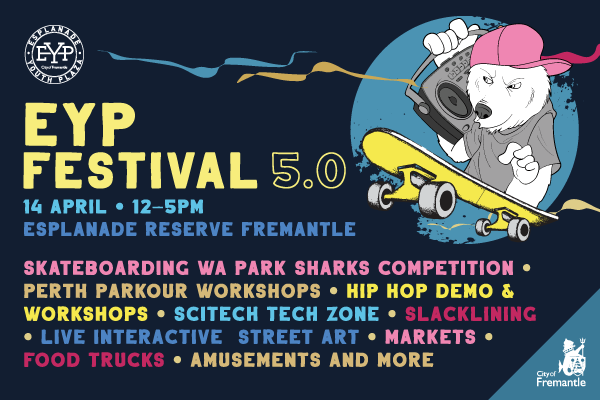 1 year ago in Community , Media release , Festivals and events

The City is celebrating this milestone, together with WA Youth Week (13-20 April), by hosting the EYP Festival 5.0 this Sunday at the Esplanade Youth Plaza.

Fremantle Mayor Brad Pettitt said Youth Week had always been a popular event with young people, and this Sunday was shaping up to be a fantastic festival with a range of engaging and fun activities planned.

“Our new Fremantle Youth Network members will also be roaming the Esplanade Youth Plaza surveying the community, so I encourage everyone to come and meet them and have your say.”

The City’s Esplanade Youth Plaza provides many free skateboarding and parkour workshops throughout the year, and is known as one of the best youth facilities across the country.

While the project initially received strong opposition from some community groups, the Esplanade Youth Plaza went on to rejuvenate the area and encourage more young people to enjoy Fremantle, even becoming a significant tourist attraction.

“It’s fantastic to see how the Esplanade Youth Plaza provides a safe and welcoming environment for the whole community,” Mayor Pettitt said.

“On any given day you’ll see young people, families and adults alike enjoying the plaza’s facilities.

“The plaza attracts so many different user groups from skateboarders and BMX riders to scooter riders, rollerbladers and even pedestrians who stop and sit down to watch all the fun from the sidelines.”

“The plaza has helped Fremantle maintain and grow its identity around the world as a first-class destination for skateboarders,” Mr Bowring said.

“People of all ages and skill levels can come together, skateboard, make new friends and challenge themselves in a supportive environment.

“The atmosphere is amazing and you can see how much joy it brings people.”

For more information about EYP Festival 5.0, visit the What’s On page on the City of Fremantle’s website.