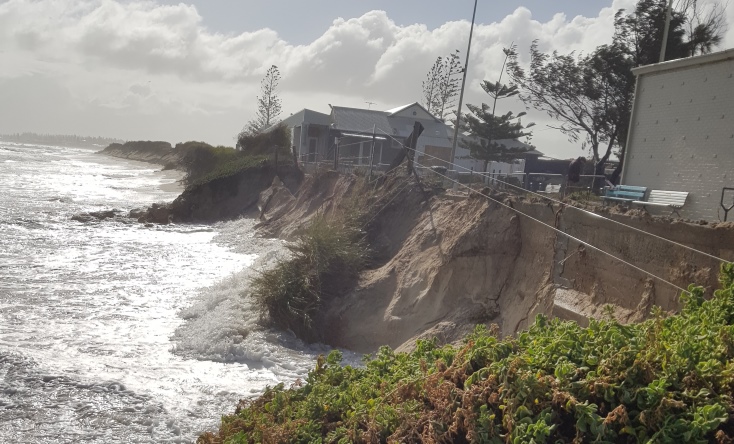 11 months ago in Media release

The City of Fremantle has started the clean-up at Port Beach after severe storms over the weekend cause significant erosion.

While the Coast restaurant and café and other facilities at the beach are open, Port Beach itself remains closed, including Sandtrax beach.

Fremantle Mayor Brad Pettitt said it was important for people to abide by the warnings, stay out of the water and keep clear of the areas that have been barricaded off.

“There are poles, posts and other debris protruding from the sand and hidden under the water that could pose a serious risk to swimmers,” Mayor Pettitt said.

“There are also sheer faces of sand where the dunes have been eroded away that have the potential to collapse, especially as they start to dry out, so I urge people not to climb in the dunes or sit in front of them.

“The bituminised area in front of the change rooms and parts of the car park have also been undermined and are unsafe, so again I urge people to stay out of the areas that have been fenced off.”

Port Beach was assessed earlier this morning by City of Fremantle staff, expert coastal engineers and representatives from the Department of Transport.

Mayor Pettitt said City staff have already commenced the clean-up and removed some of the debris.

“This week, possibly as early as tomorrow, the City will start taking sand from further up the beach and use it to provide temporary protection in front of the Coast restaurant, change rooms and the surf club annex,” Mayor Pettitt said.

“We’re also looking into the possibility of building some temporary rock walls to provide more protection to the facilities at the beach in the event of further storms.”

Port Beach has been the subject of a number of erosion events in recent years.

During 2016 and 2017 the City of Fremantle - in partnership with the Town of Mosman Park and the Department of Planning, Lands and Heritage – undertook a Coastal Hazard Risk Management and Adaptation Planning (CHRMAP) process to assess the vulnerability of the coastline along Port, Leighton and Mosman beaches.

The City and Fremantle Ports are currently investigating a range of erosion adaptation options using funding from a state government Coastal Adaptation and Protection grant.

A draft report providing long-term options to manage the erosion risk at Port Beach is expected to be released for public comment later next month.