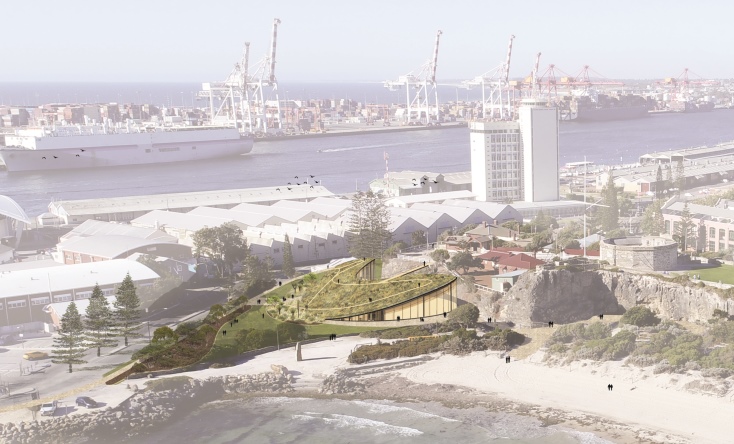 The City of Fremantle is pushing for the state government to build a major new Indigenous Cultural Centre adjacent to the Round House at Fremantle’s Arthur Head.

The original plans for Elizabeth Quay in Perth included an iconic Indigenous Cultural Centre but to date those plans have not progressed.

Mayor Brad Pettitt said Fremantle was the obvious choice to be home to Western Australia’s pre-eminent showcase for Aboriginal art and culture.

“The Manjaree site around Arthur Head and Bathers Beach is of tremendous cultural significance to the local Whadjuk Nyoongar people,” Mayor Pettitt said.

“As an important crossing point of the Derbarl Yerrigan – the Swan River – it was a meeting place, a trading place, a ceremonial place and a spiritual place.

“It was also the site where the first British colonists landed in 1829, and where thousands of Aboriginal people from across Western Australia were locked up in the Round House before being shipped to the notorious prison on Wadjemup - Rottnest Island.

“It would be a powerful statement of reconciliation to have a world-class Indigenous Cultural Centre built in a place of such significance for Aboriginal and non-Aboriginal history in WA.

“The WA Maritime Museum on Victoria Quay is a fantastic facility, but at the moment it’s isolated from other heritage attractions in Fremantle like the Shipwreck Museum and the Round House.

“An Indigenous Cultural Centre at Arthur Head would help make that connection between the Maritime Museum and Bathers Beach and give that whole area the critical mass it needs to be a major tourism drawcard.

“The underlying principle of the Cultural Centre will be to create a place for living culture, which will not only mean interactive experiences for tourists but also a meaningful place for all Aboriginal people.”

Fremantle Council recently endorsed the concept of establishing an Indigenous Cultural Centre of state and local significance in Fremantle, with a focus on tourism, Aboriginal culture and heritage and being a place to experience Aboriginal cultural practices.

The concept was outlined in a visioning report prepared in consultation with the Aboriginal community and other key stakeholders.

The council agreed Arthur Head was the preferred location, subject to further investigation and community consultation.

The existing J Shed building on the site could be used as a temporary facility before being relocated to make way for a new purpose-built centre.

The council will give consideration to an allocation of $50,000 as part of the 2019/20 budget process to prepare a detailed feasibility study and business case for the centre.