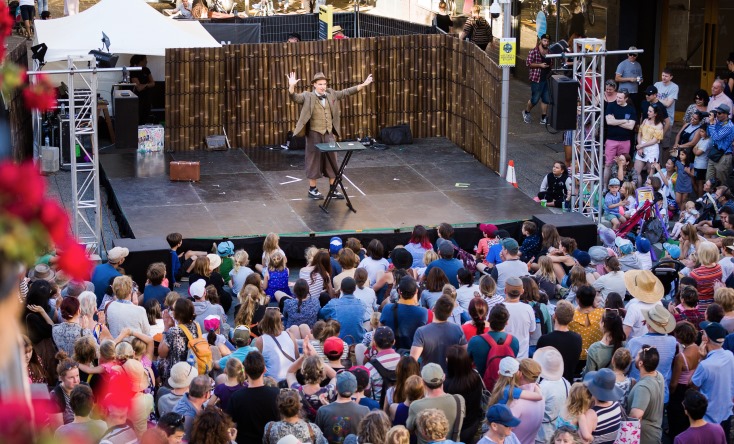 The City of Fremantle’s International Street Arts Festival is back this Easter long weekend, bringing a tonne of free laughs and awe-inspiring entertainment to festival-goers.

Over four days, from Good Friday to Easter Monday, some of the best buskers from around the world will perform more than 100 shows across various Fremantle locations.

The festival is in its 21st year and is set to deliver the best program yet, comprising buskers, street theatre, roving performers, bands and pop-up bars and eateries.

“We are extremely proud to host such a unique and well-loved festival, which shines a light on our beautiful city,” Mayor Pettitt said.

“In a few days, Fremantle’s streets and parks will come alive with the most wonderful, weird and wacky performances guaranteed to stop people in their tracks.

“From big pitches to roving performers popping up in surprising places all across the city, there are shows to make you laugh and shows that will blow you away.”

Some of the world-class entertainers joining this year’s festival include:

·         Cho Kairin: The King of the Chinese Acrobats performs death-defying, extremely dangerous stunts including his truly amazing balancing act on top of a tower of chairs.

·         Stranger Than Fiction: The Space Cowboy and The Lizardman test a string of experiments that push the mind, body and science to the limit.

·         Bug N’ Buzz: This talented duo transforms the Carriage Café at Esplanade Reserve into their very own playground.

·         Tandem: Natural Wings take to the skies at Bathers Beach with their beautiful and intricate circus choreography.

For more information about the festival including performance times and locations, visit the Fremantle International Street Arts Festival website.

It’s an exciting time for visitors in Fremantle, with the month-long Australian Heritage Festival 2019 also kicking off tomorrow.

“The Australian Heritage Festival has 159 events registered in WA, and we are proud that 40 of them will be hosted in Fremantle,” Mayor Pettitt said.

“Collectors Weekend on 18-19 May is shaping up to be a fantastic addition, and of course, I’m pleased to be involved in the bike tour again where I’ll present stories of the unbuilt and historical saves across our city.”

Australian Heritage Festival 2019 runs from 18 April – 19 May. The theme this year is Connecting People, Places and the Past.

For more information about the festival’s events, visit the Australian Heritage Festival website.