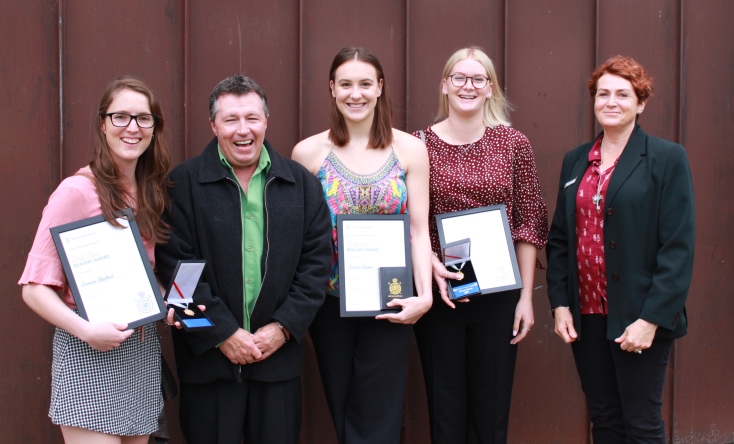 3 months ago in Media release

Staff at the Fremantle Leisure Centre have been honoured for their heroic efforts in saving a swimmer’s life earlier this year.

The group rescued a woman who suffered a seizure and was in and out of consciousness during the ordeal.

Fremantle Leisure Centre Manager John East said the woman was swimming laps in the pool with her husband as they would on any other day.

“After a few laps she began to have a seizure in the deep end of the 50m pool and her husband immediately called for help,” Mr East said.

“Off-duty swim instructor Jessica was swimming laps nearby when she heard the cries for help and didn’t hesitate to help. Assisting the husband, she carefully held her head out of the water while the seizure continued and brought her to the bulkhead of the pool.

“Lifeguards Jasmine and Georgia also came to help, and secured the woman in a rescue tube until her seizure finished and then were able to lift her from the pool.

“The pools were evacuated and duty manager James gathered the first aid equipment and administered treatment.

“Thanks to the team’s quick-thinking, exceptional courage and lifesaving skills, the woman had regained consciousness by the time the paramedics arrived and she was taken to hospital for further assessment. She made a full recovery.

St John Ambulance paramedics also applauded the ‘amazing team at the Fremantle Leisure Centre’ for their hard work, quick thinking and effective management during the incident.

In an email thanking the staff members involved, St John Ambulance said the group remained extremely calm and gathered all the appropriate equipment to manage the patient.

This is the third consecutive year Fremantle Leisure Centre’s highly competent lifeguards have been recognised at the Royal Life Saving Society Gold Star Bravery Awards. James Annetts has been awarded the Gold Star in 2017, 2018 and 2019; other recipients include Tia Stonehill (2017), Paris Laurie (2017), Pia Rodgers (2018) and Molly Higgins (2018).