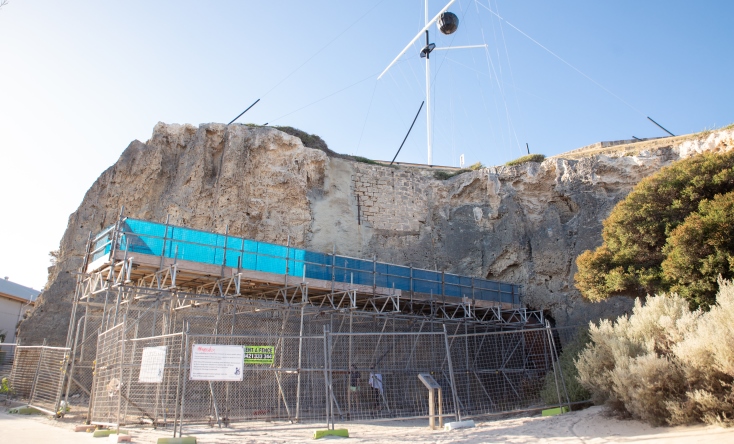 A plan to limit erosion and ensure public safety at one of Western Australia’s most significant heritage sites has been endorsed by Fremantle Council.

In March 2018 the City of Fremantle closed the Whalers Tunnel under the Round House and fenced off areas at the base of the cliffs in the historic Arthur Head Reserve after receiving advice that overhanging rock could be unstable and posed a safety risk.

The tunnel was reopened after the City erected temporary scaffolding at the western entrance to protect pedestrians in the event of a rock fall.

The City also commissioned geotechnical and heritage experts to carry out a comprehensive analysis of the condition of the cliffs and man-made walls at Arthur Head and make recommendations on how to limit further erosion and ensure public safety.

Those recommendations, including remedial works worth an estimated $1.8 million, were endorsed by Fremantle Council at a meeting last night.

Fremantle Mayor Brad Pettitt said the City would now seek the necessary funding from the state and federal governments.

“Arthur Head and the Round House is one of the most important heritage sites in Western Australia,” Mayor Pettitt said.

“Manjaree - the Bather Beach and Arthur Head area - is of great cultural significance to Whadjuk Nyoongar people, it was where the British colonists first landed in Fremantle and the Round House is the oldest public building in Western Australia.

“The City of Fremantle has continued to carry out routine maintenance at Arthur Head as part of our normal operating budget, but a project of this scale to address erosion that has occurred over a number of decades goes above and beyond what would be expected of a local government.

“Given this is a site of state and national historical significance, and there is a risk to public safety, we would expect both the state and federal governments to make a contribution to these important conservation works.”

The remedial works required include reinforcing the western entry to the Whalers Tunnel and the construction a new rock fall canopy, extending the retaining wall on the eastern side of Arthur Head near the railway line and repairing the masonry walls around the perimeter of the site.

The City will also trial an application of a Calcite In-situ Precipitation System (CIPS), which would be applied to the cliff faces as a protective surface coating to reduce the rate of erosion.