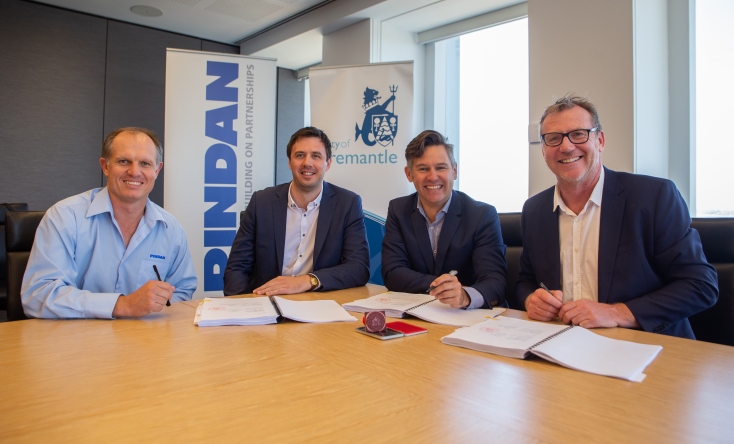 The transformation of Fremantle’s city heart is about to enter an exciting new phase with the contract signed for Pindan Constructions Pty Ltd to build the City of Fremantle’s new civic centre and library in Kings Square.

Since then the City and Pindan have been engaged in negotiations to finalise the details of the project and to ensure it delivered the best value for money for the City’s ratepayers.

Mayor Brad Pettitt said the new civic building would become a Fremantle landmark everyone could be proud of.

“They’ll be constructing a building designed by the world-renowned Kerry Hill Architects, who won a major architectural competition for the right to design the building.

"Kerry Hill also designed City of Perth Library and State Theatre Centre in Northbridge and the new civic centre will have a similar feel to those exceptional buildings.

"It will be a building for the whole community, with an amazing modern library, information centre, customer service spaces, meeting rooms for public use, change facilities and exhibition spaces.

“It will also better integrate with the historic Fremantle Town Hall, which will create more opportunities for people to enjoy that beloved building.

“Most importantly, this project will bring people back into Kings Square to create a safer and more vibrant space that we can all enjoy.”

The new Fremantle civic centre, which will be fully accessible, will also include commercial offices on the third floor to provide further jobs and business activation within the city centre. The ground floor will include retail space and a café.

It will also boast a range of sustainability features and will be one of the most energy-efficient buildings of its size in Australia.

The new civic centre is an integral part of the broader $270 million Kings Square Renewal project – a joint initiative between the City and Sirona Capital.

The Kings Square Renewal, which includes the revolutionary FOMO food and retail concept and offices for 1500 state government employees, is expected to create more than 2000 new local jobs and inject an estimated $358 million into the local Fremantle economy.

The civic centre build will be project managed by Sirona Capital on behalf of the City.

Construction will ramp up over the next few weeks and take about 18 months to complete.

“This project is funded through a combination of existing reserves, the proceeds of asset sales and additional borrowings,” Mr St John said.

“We are already seeing the catalytic effect this project is having in Fremantle, and the increased confidence in commercial and residential property development as a result of Kings Square.

“This is truly a game-changing project for Fremantle. For years the City has been striving to strengthen and diversify the economic base of the city and the Kings Square Renewal project goes a long way towards achieving that.”

“As a local company we are proud of our record of delivering top-quality construction projects all over Western Australia and across the country,” Mr Allingame said.

“We’re excited by the opportunity to build what will become an iconic civic building for Fremantle.”

Kerry Hill Architects Director, Seán McGivern, said as Kerry Hill was a Fremantle local the new civic building was close to his heart.

“We look forward to working with Pindan in delivering this exciting project and achieving the outcome for Fremantle which was the vision of both Kerry and the practice.”