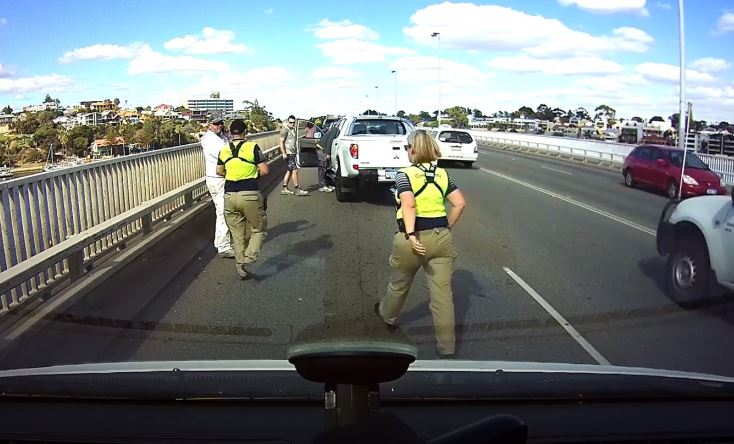 1 year ago in Community , Media release

Members of the City of Fremantle’s Community Safety Team have administered life-saving first aid to a man injured in a traffic crash on Stirling Bridge.

The team members were on patrol in North Fremantle when they came across the four-car accident at 1:30pm on Friday 17 May.

A man in his late 40s was found slumped over in the cab of his ute. He had a fractured leg and shortly after the team’s arrival stopped breathing due to an airway blockage.

The Community Safety Team applied first aid, re-opened his airway, kept his head supported and tilted back to keep the airway open and reassured the man until ambulance officers arrived.

They also had a defibrillator on stand-by in case the man went into cardiac arrest.

“But on this occasion if the team hadn’t been passing by and able to deliver first aid this man could have suffered life-threatening injuries due to the airway blockage.

“All Community Safety Team members have first aid training, due to the variety of incidents the team attends, and we’re currently organising to have those skills upgraded with advanced training.

“In this instance the team responded brilliantly, and their calm professionalism may well have saved this man’s life.”

The City of Fremantle’s Community Safety Team works closely with local police to respond to low-level crime and anti-social behaviour.

The team’s operating hours were expanded in 2017 to patrol throughout Fremantle from 7am-2am on Wednesday to Saturday and 7am-9pm on Sunday to Tuesday.

For more information visit the Community Safety page on the City of Fremantle website.