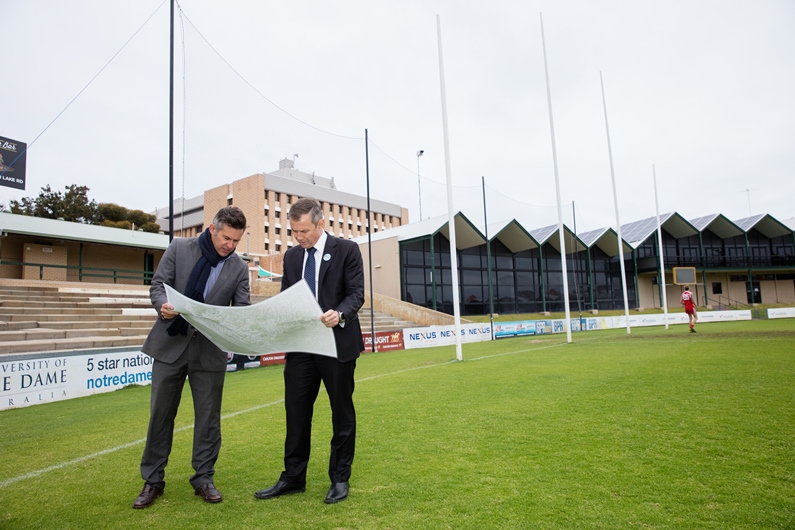 The State Government and the City of Fremantle are working together to progress plans for the redevelopment of the Fremantle Oval precinct.

Deputy Premier and Health Minister Roger Cook and Fremantle Mayor Brad Pettitt discussed the redevelopment plans during an inspection of the oval on Wednesday.

“The return of Fremantle Oval to community hands represents a great opportunity to reconnect the oval to the city centre and re-establish it as the premier sporting location in Fremantle.

“The benefits of the project can only be fully realised if the government moves to unlock state-owned land in the area, so it’s great to have the Minister here to show him around and explain what a unique opportunity this is to work in partnership on future plans for the oval precinct and Fremantle Hospital.”

Fremantle Oval returned to community hands when Fremantle Dockers surrendered their lease on the ground in August.

Under the redevelopment plan Fremantle Oval will become the home of both South Fremantle and East Fremantle WAFL clubs and a WAFL centre of excellence for umpires and coaches.

The playing surface will be re-aligned to bring it closer to the historic Victoria Pavilion, and capacity will be increased to 20,000 to cater for football, cricket and other events.

Surplus land around the oval precinct offers a range of opportunities for future uses including better public connections through the area, a mixture of commercial and residential development and parking facilities.