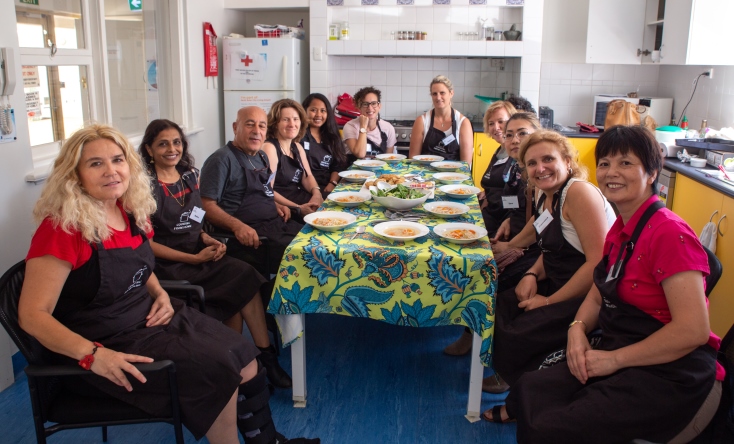 Neighbourhood Connect’s Cooking From Home project, a project funded by the City of Fremantle’s Arts and Community Grants program, is celebrating cultural diversity and aiming to create a more connected community.

The project received $7500 in the City’s last grants funding round, and comprises four workshops to upskill nine local people from culturally and linguistically diverse backgrounds with an interest in cooking, who will then go on towards hosting three pop-up restaurants.

Project facilitators, Neighbourhood Connect WA Coordinator and Community Consultant Maureen Maher and Know Your Nation Founder Helena Cohen-Robertson, said Cooking From Home came from an idea to use sentimental traditional dishes as a tool for getting to know people in the community.

“We have Indonesian, Chinese, Fijian Indian, Lebanese, Italian, Brazilian, Welsh and Turkish people, plus Helena from England and myself born in Australia, participating in the project,” Ms Maher said.

“We’re bringing together the cuisines of all those people before hosting three pop-up restaurants at PCYC Fremantle during May and June where we’ll invite the community to share in the food.

“The community dinners are going to be a wonderful opportunity to get to know each other and see that Fremantle is lot more multi-cultural than you think.”

Ms Cohen-Robertson said participants will share their stories and experiences through video and photography displays at the community dinners.

“Local schools will also create art interpretations of the cuisines and cultures that are going to be celebrated at each community dinner,” Ms Cohen-Robertson said.

“Cooking From Home is a pilot project we are then going to run in other venues and have had interest in other local governments wanting to do it.

“Thanks to the community grant, we couldn’t have done it without City of Fremantle providing financial support and the venue in kind (The Meeting Place kitchen and adjoining room).”

Whether it’s building social networks, upgrading skills, or gaining employment in the cooking industry – all nine Cooking From Home participants will work together towards fulfilling their objectives from the project and helping to create memorable dining experiences for Fremantle locals.

Narin Terzioglu moved from Europe (Turkey and Bulgaria) to Fremantle 10 months ago and was looking for ways to get involved in the community before coming across the Cooking From Home initiative.

“I first came to The Meeting Place and asked what can I do and how can I get involved,” Ms Terzioglu said.

“I was an Interior Decorator and Landscape Artist before, but now I’m curious about cooking.

“In Australia I’m beginning again, and it is a good thing to get involved in these kinds of activities.”

Fremantle resident Ali Sarhan, another Cooking From Home participant, feels similarly about wanting to get more involved in his community.

Of Lebanese origin, Mr Sarhan emigrated with his wife from Ireland and has been living in Fremantle for the past 22 years. Over the years he’s owned his own restaurant and food truck, but is now retired.

“I’m not a trained or qualified chef, I just love cooking,” he said.

“I read about the project and thought it was a very good idea as everybody loves food.

“The people I have met are great and it shows what Fremantle is all about.”

The pop-up community restaurants will be held at Fremantle PCYC on 9 May, 29 May and 20 June. They will each seat 80-100 people and are a way for the community to celebrate other cultures through the fantastic food showcased by the Cooking From Home participants. They are also an opportunity for people from the local community to get to know each other better and break down barriers between the cooks and community. Click here to purchase tickets.

For more information on the grants, visit the Arts and Community Grants page on the City of Fremantle website.