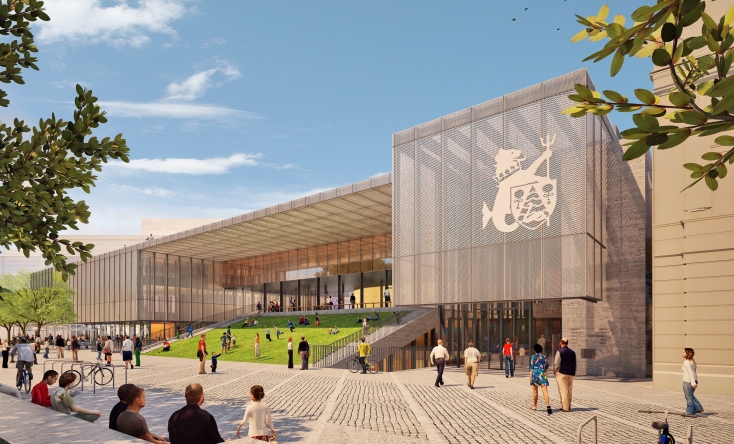 The City of Fremantle’s soon-to-be-built $50m administration and library building will enhance the important heritage aspects of Fremantle’s Kings Square according to a recently received heritage impact statement.

The independent report by Griffiths Architects has shown the new building has a ‘favourable effect on heritage’ by providing strong interactions between the historic Fremantle Town Hall and the civic functions of the new building.

The report advises the n+ew building will help return the town hall to prominence by reintegrating the town hall back into the centre of civic life:

The overall presentation of the town hall, civic functions and administration will be visually enhanced by a more integrated 21st century building that relates well to the town hall, Kings Square and William Street and Newman Court.

The changes will reintegrate the town hall back into day-to-day city life, provide proper connections to services and lift areas and ensure that contemporary requirements that can be so damaging to historic buildings are located in the new building.

Fremantle Mayor Brad Pettitt said council had taken a long-term approach in determining the design for the new building:

“Council has a clear focus that the new building must be able to stand the test of time to last 100 years or more to become Fremantle’s future heritage. This report is further proof this will be the case,” said Mayor Pettitt.

“We carefully weighed up all the information available and decided a full redevelopment rather than a refurbishment of the existing building will best meet the long-term needs of the Fremantle community.

“A complete redevelopment will look better, function better, cost less to maintain and operate and will mitigate the need for costly extensions and technology upgrades in the future.

“As well as the positive heritage implications, the new buildings will deliver better facilities and customer service experiences to the people of Fremantle.”

The report was critical of the current 50+ year old building saying it had failed to make a positive contribution to the urban setting of Kings Square, was intrusive, dislocated the town hall from its administrative functions and was past its useful life.

“While serving its purpose for more than fifty years, the current building is highly inefficient from an environmental and operating cost perspective; suffers from concrete cancer, has significant asbestos contamination issues and does not meet legal disability access requirements,” Mayor Pettitt said.

“What we didn’t want was to build something which, like the current civic and administrations building, needs replacing in 50 years’ time. Council made a conscious decision to ‘build it once and build it properly’ in determining the design of the new building.

About the Kings Square Fremantle renewal

At $270m it’s by far the biggest project ever undertaken by a Fremantle Council and is one of the biggest developments in Fremantle’s history.

It’s a game changing project for Fremantle which will deliver:

The once-in-a-generation project will see the heart of Fremantle transformed into a vibrant cultural, community and commercial hub in coming years.

The project will create more than 2 100 new local jobs for Fremantle once operational, injecting $358m into the local economy.