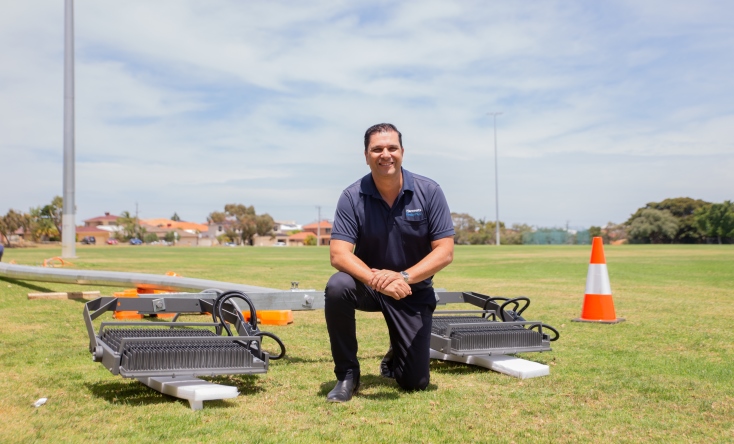 The City of Fremantle has provided a major boost to local sporting clubs through the installation of four new light towers at Hilton Park.

The latest technology LED lights have replaced the three ageing and non-compliant light towers that were removed from the upper oval at Hilton Park earlier this year.

Fremantle Mayor Brad Pettitt said the new lights were a significant upgrade at one of the City’s most important recreational assets.

“Hilton Park is one of the City’s most in demand facilities - with soccer, cricket, football, rugby league and many other sports all played there,” Mayor Pettitt said.

“Having suitable lighting that complies with the current Australian standards for sports ovals is really important for the clubs to allow them to schedule mid-week training sessions at times convenient to their members.

“The new LED lights at Hilton Park will be noticeably brighter than the old metal halide ones, and much better because they can be switched on and off immediately without the need for warming up or cooling down.

“And because they are LEDs they’ll use much less energy, be much cheaper to run and require far less maintenance.

“Upgrading the street lights along the Cappuccino Strip from metal halide to LED has reduced maintenance costs by at least 90 per cent, so that gives you an example of how much we’ll save.”

The newly-lit pitch is available for seasonal hire by sporting clubs including Fremantle City Football Club.

Fremantle City Football Club President Maurice Oteri said the new lights would make it much easier for the club to accommodate its growing membership.

“Football has the highest participation rate of any sport in the country. During the season Hilton Park caters for up to 600 players of all age groups from 4.30pm through to 9pm, four or five nights a week,” Mr Oteri said.

“The installation of the new lights is nothing short of a glorious achievement and relief for the volunteers behind the scenes who schedule the training allocations.

“The full pitch lighting will also allow the club to schedule night games and take the load off the main Hilton pitch.

“I’d really like to thank the City of Fremantle for its commitment to this cause, and a special thanks to our tireless Vice President Alex Ricciardi for his perseverance in making the new lights a reality.”

Following an audit of floodlights on all of its sporting fields earlier this year the Fremantle Council allocated $120,000 for the new lights at Hilton Park in the 2019-20 annual budget. The council also prioritised the replacement of light towers at Frank Gibson Park and Gilbert Fraser Reserve for future budget consideration.