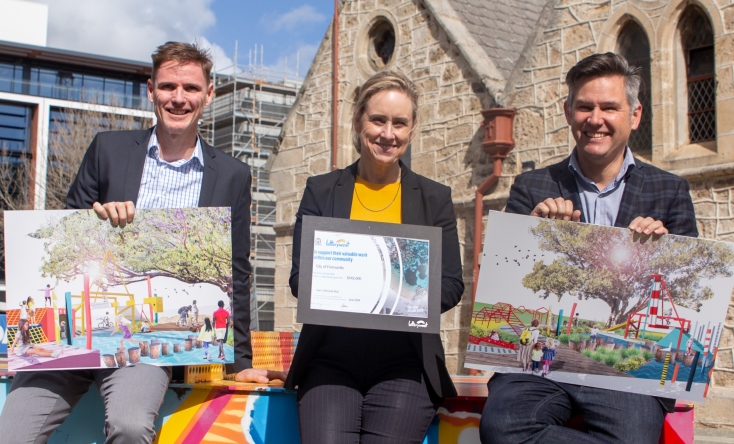 The City of Fremantle has been successful in securing a $342,000 grant from Lotterywest to go towards the new play space in Kings Square.

Inspired by the Fremantle’s industrial history and close links with nature, the concept design for the play space includes features such as cranes, bridges, train tracks and shipping containers and incorporates natural elements including water and trees.

Fremantle Mayor Brad Pettitt said it was tremendous to get Lotterywest’s support for the play space.

“We want Kings Square to be a place where families meet and spend time together, so the play space is an absolutely critical element in the Kings Square Renewal project and our plan to bring more people and activity back to the centre of Fremantle,” Mayor Pettitt said.

“The concept is for the play space to have zones which will appeal to a broad age range from toddlers through to primary school children, as well as being accessible for children with disabilities.

“Programmable lighting elements will also highlight the play space features at night, creating a whole new look and feel after dark and to make it a feature of the broader public space in Kings Square.

“We really appreciate the support from Lotterywest and thank them for their important contribution to the revitalisation of Fremantle’s civic heart.”

Around 170 Fremantle kids and their parents were asked to help design the new play space through surveys and a series of workshops at local schools.

WA-based landscape architecture firm Seedesign Studio were selected via a competitive tender process to develop a concept based on their feedback.

Fremantle MLA Simone McGurk said the new playground would be a great, family-friendly addition to the redeveloped Kings Square.

“It’s so important that we have spaces in the CBD for Freo kids to connect and engage in creative play,” Ms McGurk said.

Construction on the play space is expected to start in August 2020 and be completed by December.

A focal point for the play space will be a new Moreton Bay fig tree to replace the tree that had to be removed last year due to public safety concerns.

A replacement fig tree has been identified and is being prepared for relocation to Kings Square in winter next year.

The City of Fremantle is undertaking a $270 million renewal of Kings Square in partnership with Sirona Capital.

The project includes Sirona’s redevelopment of the old Myer and Queensgate sites to create offices for 1600 state government employees and the revolutionary FOMO food and retail concept, the construction of the City of Fremantle’s new civic centre and library, and the rejuvenation of the public spaces that surround the site.