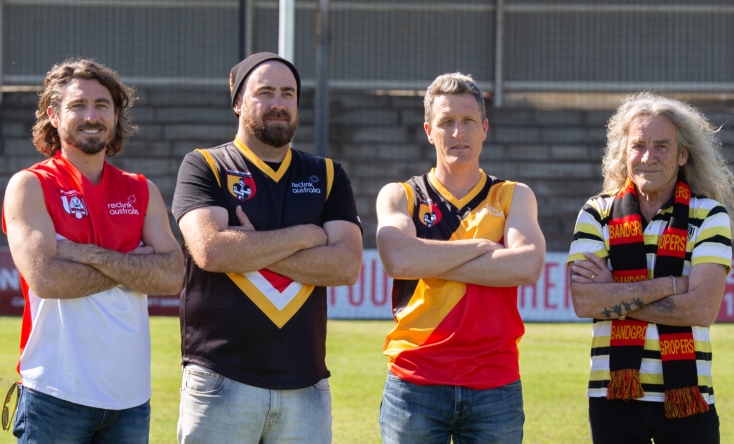 8 months ago in Community , Media release , Festivals and events

The most anticipated game in WA’s footy calendar is on again at Fremantle Oval this weekend, when the Bandgropers will once again tackle the Newshounds in the Reclink Community Cup.

The annual charity match, which pits the who’s who of the music scene against the media’s best and brightest, began in Melbourne in 1993 and has since expanded to include events in Sydney, Adelaide, Hobart, Brisbane and Canberra.

WA event organiser and Plugger-esque full forward Tom Fisher from local band Tom Fisher and the Layabouts said this year’s match on Saturday would be the fifth time Fremantle has hosted the cup.

“I used to live in Melbourne and was touring with a band over there and was familiar with the Melbourne game,” Fisher said.

“Since I’ve come on board as one of the organisers here I’ve seen first hand the stuff Reclink does and I really think it’s a great charity.

“They put together lots of sports programs for disadvantaged people that probably wouldn’t get out and do it very often.

“We’re hoping that the week after the end of the season people will still be keen for another game of footy, and there’s a great band line-up for the after party at Clancy’s which is always a hoot.”

The Bandgropers will feature members of some of WA’s best bands and be coached by legendary blues man Wayne Green and Donna Simpson from The Waifs.

The Newshounds will boast players from RTRFM, Channel Nine, Channel 10 and local politicians, including State Treasurer Ben Wyatt and Fremantle Councillor Adin Lang, who will be looking to repeat his best-on-ground performance in last year’s cup.

Federal Member for Fremantle and wiry back pocket Josh Wilson said he was excited to be getting his second crack at the Community Cup.

“I think what Reclink does to promote social inclusion through sport is wonderful,” Wilson said.

“It’s a great example of how when we want to address disadvantage it’s not just about housing and income support and other  basic needs,  it’s about the full range of engagement in social and community life.

“I love coming along to the Community Cup. It’s a fantastic event and I encourage people to come and see it for themselves and make a donation.”

In addition to the footy action, entertainment will be provided by Noah Dillon and The Little Lord Street Band. There’ll also be tasty food stalls and both alcoholic and non-alcoholic beverages on offer.

The Community Cup is the biggest annual fundraiser for the charity Reclink Australia, which partners with more than 200 community organisations to provide sport and art programs to disadvantaged Australians.

In Fremantle, Reclink partners with the City of Fremantle to support the weekly Reclink Street Games at Princess May Park.

To watch a video about the Reclink Street Games, click here.