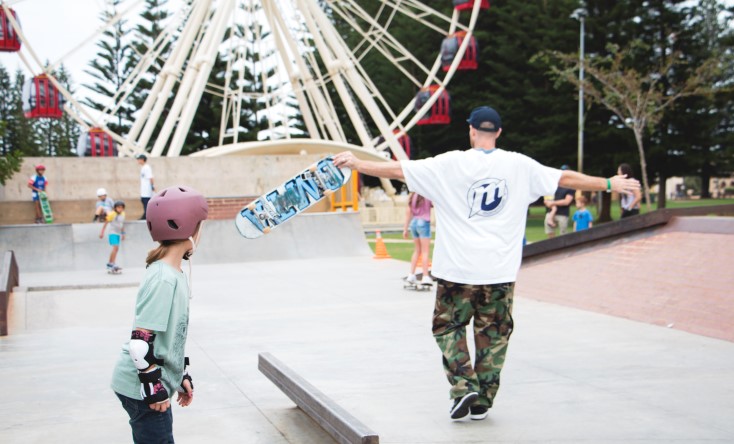 3 years ago in Festivals and events

This year’s youth forum—which has become a hallmark of National Youth Week in WA—will be completely turned on its head with the first ever Ferris Forum to be held on the Freo Skyview Wheel at Esplanade Park.

On Sunday 9 April, mixed groups of five people will enter the Fremantle Skyview Wheel for a rapid fire, seven minute long discussion about the most pressing issues for young people today.

It’s hoped the short amount of time riders will have in the wheel will produce genuine and candid responses other mediums fail to uncover.

“From its very inception, the Fremantle SWITCH has focused on being as innovative as possible. As soon as the idea to hold the forum in Fremantle’s Wheel was proposed, everyone’s eyes just lit up,” said Fremantle SWITCH spokesperson Keane Bourke.

“It’s been great to see this crazy idea develop into a reality through our work with Propel Youth Arts WA.”

Fremantle Mayor Brad Pettitt said he was pleased the young people of Fremantle had a new way to be heard with the inception of the Fremantle SWITCH late last year.

“Fremantle is a very engaged and passionate community and our young people are no exception given the number of applications we received to be part of the SWITCH,” Mayor Pettitt said.

“The Ferris Forum is a great example of the sort of innovative thinking we’ll see from the SWITCH. Fremantle Council looks forward to working with our young leaders of tomorrow to bring more great ideas to life.”

Switch It Up event

Switch It Up is the official closing event for National Youth Week 2017, to be held on Sunday 9 April at Fremantle’s Esplanade Reserve.

Presented by the City of Fremantle, Propel Youth Arts WA and the Fremantle SWITCH, the event will build on the popularity of Freo’s Esplanade Youth Plaza and National Youth Week’s aim of celebrating young people of all backgrounds, to offer a range of engaging and fun activities.

The SWITCH is running a series of workshops with other Youth Advisory Council’s (YACs) from around the state in the lead up to the event to explore issues affecting young people. The themes developed in the workshops will be used to create the Ferris Forum.

After discussions in the wheel, the results will be collected and made available to state government, youth agencies and other local governments to inform programs policies.

Regional centres including the Shire of Broome, City of Karratha, Town of Port Hedland, City of Greater Geraldton and City of Albany, will take part in the youth forum as well, ensuring the voices of young people in the region are heard.

About the Fremantle SWITCH

The Fremantle SWITCH is Fremantle’s take on a youth advisory council.

Since starting in June 2016, with support from the City of Fremantle, 40 passionate young people from 12-25 years old with strong links to Fremantle have been hard at work putting together a structure from scratch and organising activities in response to the needs of young people in Fremantle.