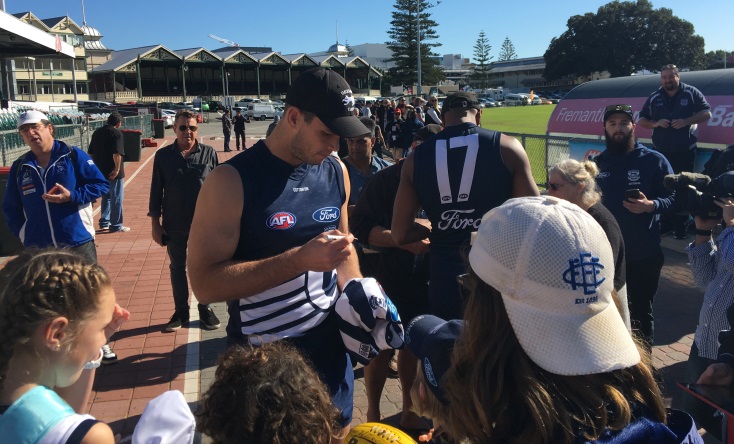 The AFL ladder-leading Geelong Cats have been lapping up the sunshine in Fremantle this week.

The Cats, who have been hosted by the South Fremantle Football Club, have based themselves in Fremantle and been training at Fremantle Oval ahead of their clash with the Fremantle Dockers on Saturday.

South Fremantle Football Club President Peter Christie said it was a coup to have Geelong based in Fremantle for the week.

“This was organised eight weeks ago when our director Anthony Van Der Wielen, who also manages Tim Kelly, was in conversation with Geelong and they advised they were keen to come straight to Perth to play the Dockers after having played in Sydney last week,” Mr Christie said.

“They were keen to reduce the travel component and use the week together as a team to start building towards their finals campaign, and we were very happy to oblige.

“We had Joel Selwood, Travis Varcoe and a couple of others come over and actually train with our squad a few years back and our young group loved the experience of training with AFL players of that quality.

“We’re fortunate to be hosting Chris Scott and our own Tim Kelly for lunch on Friday.

“With Tim’s massive impact on the competition in his first season and a half, and all the speculation on his future, it will be a very interesting and informative Friday afternoon.”

As well as the opportunity to pick the brains of Chris Scott and Tim Kelly, the fundraising event also includes a three-course lunch and beverage package.

Tickets are $120 per person and can be secured by calling South Fremantle Football Club on 9335 1555.