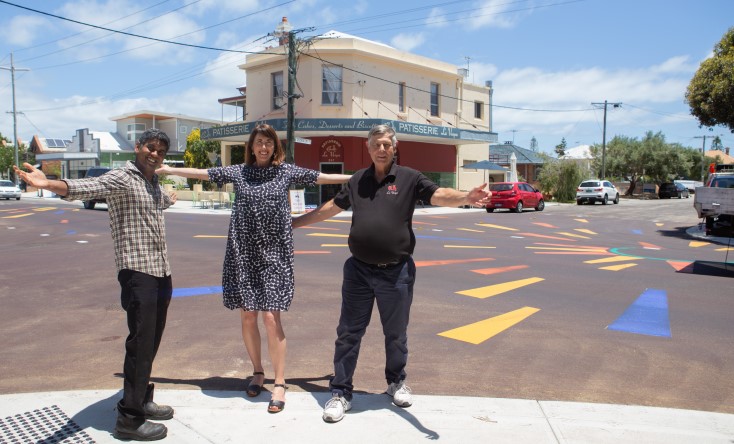 A burst of colour has provided the finishing touch to the City of Fremantle’s latest upgrade to South Terrace in South Fremantle.

The streetscape enhancement at the intersection of Jenkin Street is the second in a planned series of six raised ‘nodes’ along the popular café and dining strip.

Four of the temporary speed cushions in the area have been replaced with a single raised platform, which has been paved with red asphalt to alert motorists they’re entering a shared space and encourage them to slow down.

The works also included narrowing the roadway to make it safer to cross the street and create more space for pedestrians, alfresco dining, new street furniture and trees.

As a final flourish, the road has been painted with a colourful ‘sunburst’ design inspired by the mosaic in the pavement in front of The Meeting Place.

Ron Kop has owned Patisserie La Vespa on South Terrace for 15 years, and said the latest upgrade is a big improvement.

“Everything has changed in South Fremantle in the past few years – the people, the buildings, everything – and change is always good,” Mr Kop said.

“The new colours on the street are great, it’s bringing a lot of interest to the corner, and any more alfresco space is space is good space.”

Elance Fernando, who has run the Copper Chimney Indian restaurant for the past 20 years, said he greatly supported the City of Fremantle’s efforts to slow down the traffic on South Terrace.

“One hundred per cent I am supportive, because it’s better for people to slow down,” Mr Fernando said.

“It gives plenty of support to the local businesses because people can see what’s around them and what’s happening inside when they’re driving slower.

“It’s especially good for the morning breakfasts on Saturday and Sunday where people are sitting in the alfresco areas and the kids are running here and there, so it’s a very good thing to be slowing down the traffic.

“It’s a good thing for the community, and also for the businesses like me and other people.”

The Jenkin Street upgrade was funded through a $268,000 grant from the federal government’s Local Roads and Community Infrastructure Program.

The City of Fremantle’s first streetscape enhancement along South Terrace, at the intersections of Little Lefroy Lane and Sydney Street, was completed in 2018.

Other nodes planned for the intersections of Scott Street, Charles Street, Nelson Street and Orient Street are subject to future budget allocations. The temporary speed cushions along South Terrace will be progressively removed as each node is completed.

Earlier this year the City of Fremantle successfully applied to have the speed limit along South Terrace and in other residential streets in South Fremantle reduced to 40 kilometres per hour.

To find out more about Fremantle’s 40km/h zone watch this video.