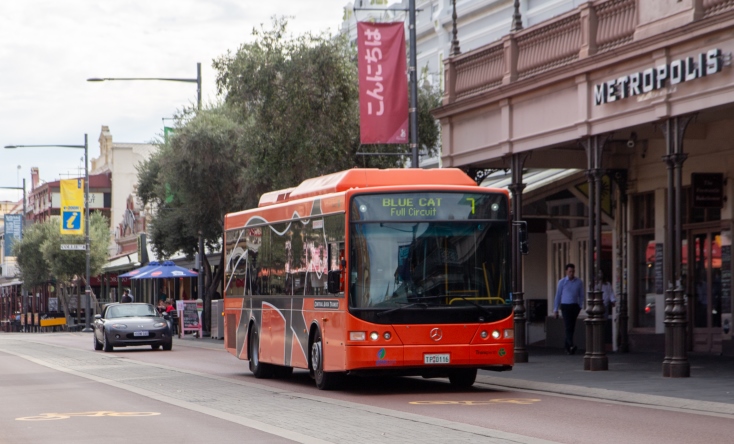 The Fremantle Central Area Transit service was introduced in 2000 and is jointly funded through an agreement between the City of Fremantle and Public Transport Authority.

The Blue CAT operates on a loop along South Terrace and Marine Terrace between Fremantle Station and South Beach, while the Red CAT connects attractions like the WA Maritime Museum, Round House and Fremantle Arts Centre.

In response to reduced patronage due to the COVID-19 pandemic, Fremantle Council voted in June to ask the PTA to vary the agreement and cease the operation of the Red CAT for up to 12 months and reduce the frequency of the Blue CAT service from a bus every 10 minutes to a bus every 20 minutes.

Fremantle Mayor Brad Pettitt said it was hard to justify the expense of maintaining the current service levels at a time when the City was having to make some very tough decisions in the wake of the financial impacts of COVID-19.

“For the past 20 years City of Fremantle ratepayers have funded 60 per cent of the operating costs of the CAT buses, while the Public Transport Authority has funded 40 per cent.

“The costs of running the Joondalup CAT service is shared equally between the City of Joondalup, PTA and Edith Cowan University, while the Perth CAT services are funded out of the state government’s Perth Parking Levy.

“The council acknowledges the high level of patronage the Fremantle CAT buses have traditionally enjoyed and the importance of the service to a broad cross section of the community, and we would prefer the services to be retained subject to a more equitable and sustainable funding model.

“We are very keen to explore alternative funding arrangements to reduce the financial burden on our ratepayers and ensure the preferred service remains viable into the future.”

The Fremantle CAT service currently costs the City around $670,000 per year. The changes will deliver savings of around $432,000 per year.

From Sunday 16 August the Blue CAT will operate during the same hours but on a 20 minute frequency.

The Red CAT previously operated on a 15 minute frequency, 7 days per week between the same times as the Blue CAT.

For information on alternatives to the Red CAT please visit the Transperth website.