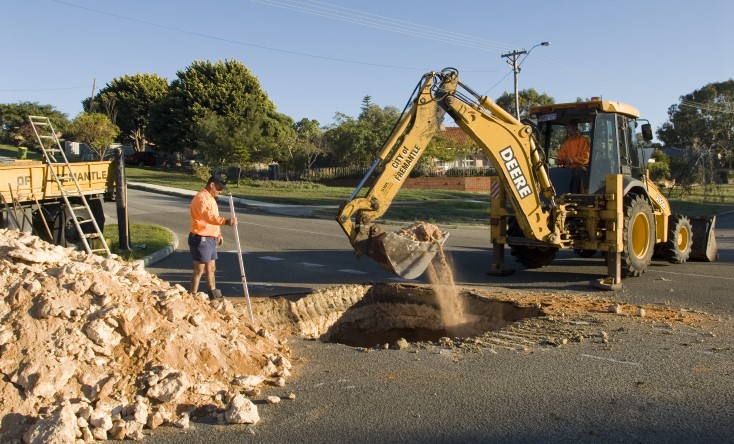 Our staff work round the clock to make improvements to our City and doing what we can to help our great community. We want to celebrate every achievement—big and small— with our quarterly project summary series. In this instalment we look at October to November last year, and you can check our 2021 project wrap up here. Keep an eye out for our 2022 Quarterly soon. 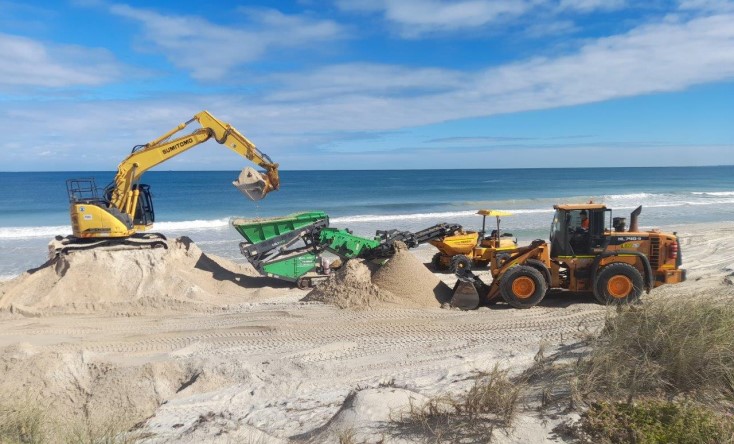 Phase One of the Port Beach erosion project commenced in October. This stage included sand screening for small rocks within Sandtrax Beach and the southern 200m of Port Beach, south of Tydeman Road, and removal of a remnant seawall. Phase Two of the project will see approximately 150,000 cubic metres of sand dredged from Fremantle Ports’ shipping Deep Water Channel and placed onto Port Beach; aimed to commence at the end of Summer this year. Learn more about this project here.

Drainage works on Hampton Road were completed, which upgraded some pits, pipework and installed a new footpath strip drain. The works now mitigate risk of flooding as previously this area had been subjected to flooding during the winter months.

In preparation for the 2021 Fremantle Biennale public art festival, sections of the footpath near the Fremantle Traffic Bridge were repaired. The Engineering Infrastructure maintenance team completed concrete works on sections of old and damaged footpath panels over a 500m length of existing footpath along Riverside Drive. The pavement was then turned into a colourful explosion for the Fremantle Biennale Festival, tracing the shoreline of the Derbarl Yerrigan, connecting Fremantle’s Traffic Bridge and the Stirling Bridge—an art installation you can still find today. This improves pedestrian movements within the area as well as continuing to be an attraction for visitors into the area. 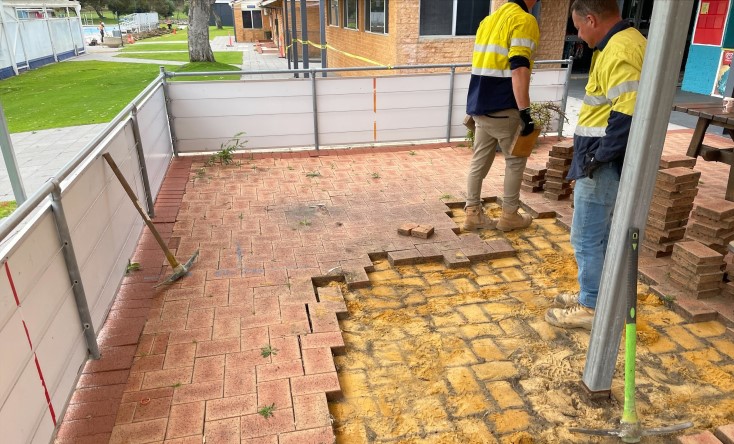 Did you know we can help you with lost property? A resident dropped her keys into the drain outside her property and was able to get in touch with our Infrastructure Engineering team to quickly retrieve them for her.

LED lights were installed in residential streets in the area around Frank Gibson Park, bounded by High Street, Carrington Street, Marmion Street and East Street, as well as the streets around Cantonment Hill and between Fremantle Park and Queen Victoria Street. The new energy-efficient lights are not only safer and brighter but are also cheaper to run. You can read more about this project here.

Paving works were finished around William Street and Walyalup Koort. This included our cleansing and restoration team breathing new life to the pavement in the area, making it safer and an altogether more pleasant area to see and walk on.

The paving in front of the Fremantle Leisure Centre kiosk was completed in November. During this project, the crew on site lifted existing pavers, imported clean yellow fill, levelled, and compacted the base, Screeded the area and re-laid the pavers. This helped to restore the alfresco area at the leisure centre for people to sit in the kiosks under the shade. 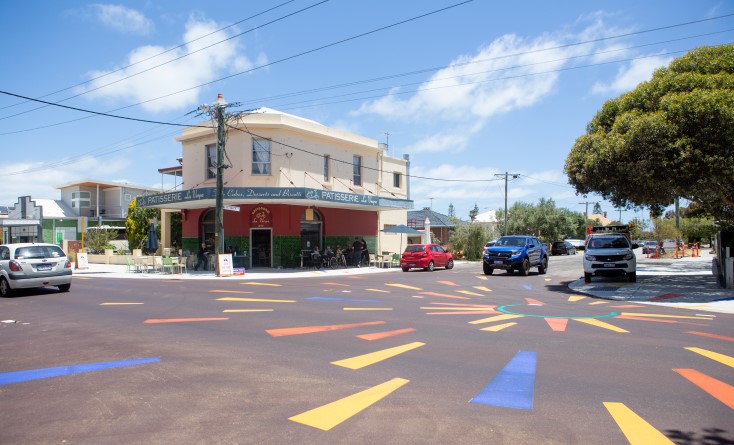 Improvements were made to the Fremantle Arts Centre parking spaces. What is now the main allocated parking space was once an old building, which was then demolished and used as an informal parking space on the old slab. Our team has flattened and tidied the grounds and created line marks to create a more formal parking area. This created not only a more efficient parking area, but also made it safer for drivers and pedestrians.

Improvements to our bike lane and footpath shared-use path that follows the railway line on Marine Terrace at the entrance into the Fremantle Sailing club. These works were quite complex for our staff as they were next to the railway line, which required the works to be done at night time with representatives from the Public Transport Authority overseeing the safety of our team.

Our staff completed the streetscape upgrade on South Terrace at the intersection of Jenkin Street. The works included narrowing the roadway to make it safer to cross the street and create more space for pedestrians, alfresco dining, new street furniture and trees. Over 150 tonnes of construction rubble was removed and recycled, and 100m3 of concrete was poured. All of our Internal Engineering Operation teams assisted with this project within their own respective streams such as drainage, footpaths, road furniture and signage. As a finishing touch, the road was painted with a colourful ‘sunburst’ design inspired by the mosaic in the pavement in front of The Meeting Place. You can read more about the upgrades here.

Variable speed signs have been installed in the Hilton town centre to reduce the speed limit to 40 kilometres per hour. The new variable speed signs reduce the speed limit along South Street from 60km/h to 40km/h from, 7.30am to 10pm seven days a week. As the area is prone to accidents, this ensures a safer more user-friendly crossings, especially for children and elderly people. Learn more about this safety initiative here.

Staff installed fencing between Lefroy tip and the nearby school to improve safety and security. The Lefroy tip garrison fence then received a site clean-up, with the top of the poles of the fence trimmed to uniform height and capped.

Do you have any experiences with our staff and services you’d like to share? Email us on info@fremantle.wa.gov.au or visit our contact us page for more ways to get in touch.

Visit My Say Freo to keep engaged and up to date on project information and outcomes of previous engagements. 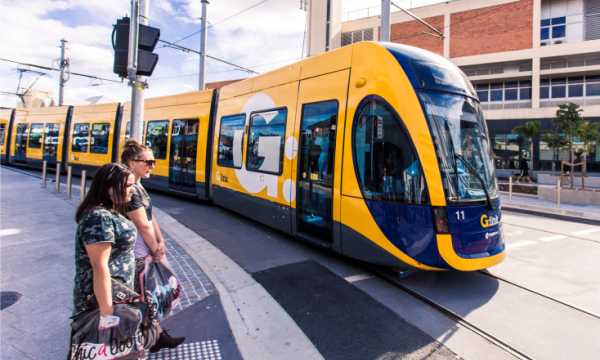 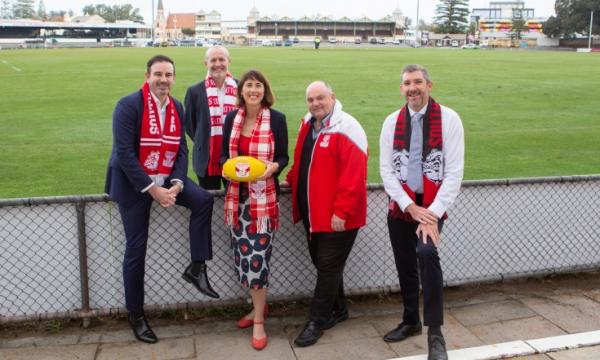 Fremantle Oval to remain the home of the Bulldogs 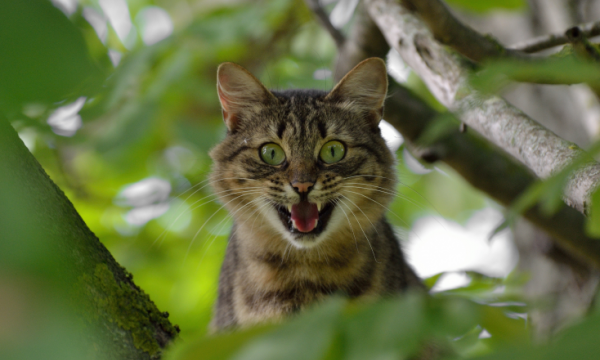