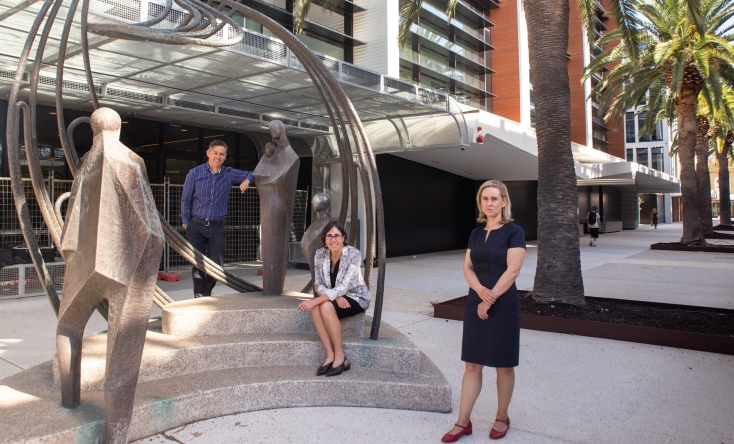 Department of Communities now part of the Freo family

The first 300 staff from the Department of Communities have officially moved into their new head office in Fremantle’s Kings Square.

The state government workers are occupying new office space created as part of the Kings Square Renewal project – a $270 million redevelopment of Fremantle’s civic heart by the City of Fremantle and Sirona Capital.

It is expected that by the end of June more than 1700 staff from the Department of Communities and Department of Transport will have relocated to Kings Square.

Fremantle Mayor Brad Pettitt said having the new workers in Fremantle would provide a substantial boost to the local economy and Fremantle traders.

“To help them settle in we’ve partnered with the departments and the Fremantle Chamber of Commerce to put together a welcome pack providing tips from the locals on their favourite shops, cafes and lunch spots.

“Unfortunately with the latest updates on the COVID-19 response they’ll only be able to order takeaways for the time being, but once this is behind us they’ll discover Fremantle has some amazing cafes, bars and shops and is a great place to work.

“The main driver for the City’s decision to embark on the Kings Square project was to revitalise the heart of the city and get more people living and working Fremantle, so it’s fantastic to see this happening.

“When our new building - the Walyalup Civic Centre - is finished and Sirona’s FOMO development is open Kings Square will be full of people and an amazing, lively place to be.”

Department of Communities Director General Michelle Andrews welcomed staff to their new offices in the South Campus at Newman Court.

“Today marks a very significant milestone for the Department of Communities and I am very pleased to welcome the first 300 staff to Fremantle. Our new head office provides a safe and welcoming environment for our staff members and visitors.

“Our wonderful new accommodation will help our staff work together more efficiently to create pathways that enable individual, family and community wellbeing.

“We are looking forward to discovering the surrounding vibrant, cultural and historical Fremantle which I’m sure will inspire us to do our best work.”

Minister for Child Protection Simone McGurk said the relocation of Department of Communities workers to Fremantle’s redeveloped Kings Square would provide a significant boost to the area’s working population.

“The department’s move to Fremantle could not come at a better time,” Minister McGurk said.

“As we all practice responsible social distancing and alternative working arrangements, this new location could provide an opportunity.

“In the medium and long term it is going to be crucial that we have a large number of people working in Fremantle as we weather the COVID-19 pandemic.”

Another measure to make the Department of Communities feel at home in Fremantle was the relocation of ‘The Family’ - an iconic sculpture by celebrated West Australian artist Margaret Priest.

The artwork was commissioned by the state government in 1975 and welcomed staff and visitors to the Department’s former head office in East Perth for over 40 years.

Standing 4.2 metres tall and weighing almost 20 tonnes, ‘The Family’ was transported from East Perth and installed in front of the main entrance of the department’s new headquarters in Newman Court in a major operation in November.

Margaret Priest is one of the few female artists of her time to live and work as a professional artist in post-war Perth. She introduced modernist concepts in her major works during the 1950s to 1980s and had an important influence on Perth's cultural landscape.

The Pioneer Woman at Kings Park is her most recognised piece, however Margaret Priest also produced many works displayed at Kings Park, Perth Zoo, the University of Western Australia and in private collections.

The project includes Sirona’s redevelopment of the old Myer and Queensgate sites to create offices for more than 1700 state government employees and the revolutionary FOMO food, art and retail concept, the construction of the City of Fremantle’s new civic centre and library building, and the rejuvenation of the public spaces that surround the site.