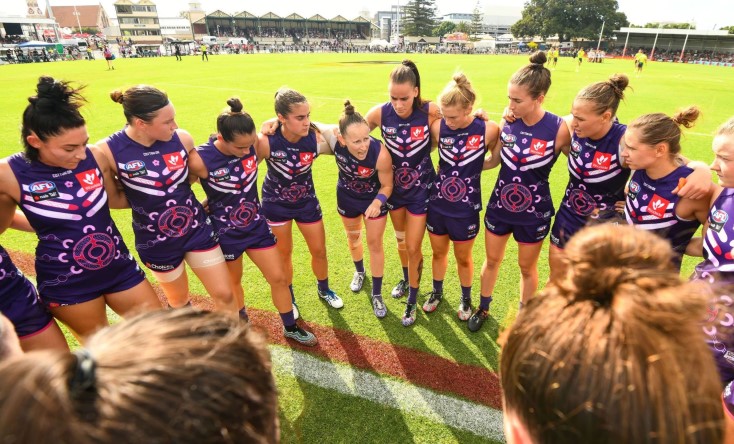 Football fans wanting a taste of derby action will be right at home in Freo this Saturday with AFLW teams Fremantle and West Coast doing battle at Fremantle Oval.

The pre-season clash, which precedes the ‘other’ game between the two WA AFL teams, is the latest in a string of high profile sporting events to be held right here in Freo.

Bouncedown is at 12pm with a crowd of around 1,000 people expected to attend.

Fremantle Oval is fast earning a reputation as one of the best sporting venues in WA with English Premier League superstars Leeds United and the English Rugby team training here during recent visits down under, and of course it is the long-time home of South Fremantle Football Club and, now, Perth Glory.

Fremantle mayor Hannah Fitzhardinge said action on the field was being matched by efforts behind the scenes to secure support for a major redevelopment of the historic ground, including new clubrooms and grandstands, improved spectator facilities, lighting upgrades and the realignment of the playing field to reconnect the oval to the heritage-listed Victoria Pavilion.

“It’s already a huge part of our history and the redevelopment will ensure it plays a central role in Fremantle—and WA’s—sporting future,” she said.

“The AFLW action this Saturday emphasises again the importance of having a major sporting and recreational hub in our city and it’s been great to see so many people flocking to Freo to soak up the carnival atmosphere during events like the WAFL grand final, the Leeds visit – and now our two top women’s football teams.

“Businesses also benefit from these events which is why we are working so hard to make Freo a mecca for all sorts of sports.”

Saturday’s pre-season derby will be followed by five matches at Fremantle Oval during the season proper, with the first match scheduled for Saturday 3  September.