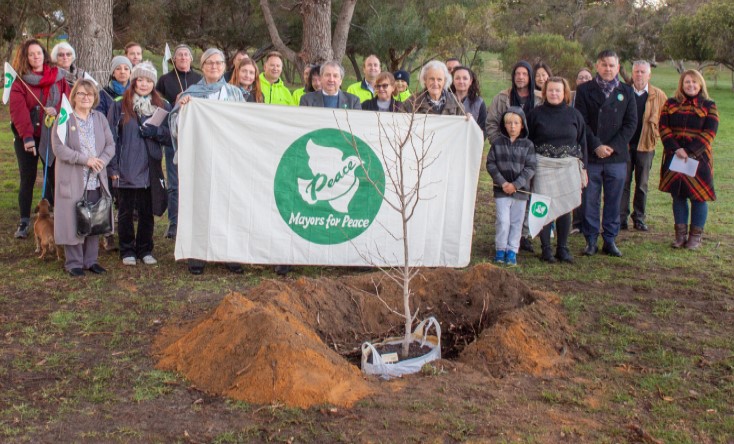 Two trees grown from seeds donated to the City of Fremantle by the Mayor of Hiroshima have been planted in Fremantle’s Peace Grove to mark the 75th anniversary of the Hiroshima bombing.

The Gingko biloba seeds came from a tree that survived the atomic bomb attack on the Japanese city of Hiroshima on 6 August 1945.

They were presented to the City of Fremantle in 2014 by Hiroshima Mayor Tadatoshi Akiba as a symbol of hope and courage to live in a world free of nuclear weapons.

After receiving the gingko seeds the City of Fremantle partnered with Ellenby Tree Farm and the City of South Perth Nursery, who carefully raised the trees until they were ready to plant this year.

Two gingko trees were planted this morning at the Peace Grove at Dick Lawrence Reserve in Beaconsfield at 7:15am local time, to coincide with when the bomb was dropped at 8:15am Hiroshima time.

Another two trees will be planted at 10:02am on 9 August, the time when the second atomic bomb was dropped on Nagasaki.

The tree plantings are being supported by Mayors for Peace – a global movement formed in 1982 by the Mayor of Hiroshima to raise awareness and push for the abolition of nuclear weapons.

Fremantle Mayor Brad Pettitt said the organisation has since grown to include 7909 member cities and shires in 164 countries.

“Fremantle joined Mayors for Peace in 2004 and is now one of 26 executive cities around the world - the only one in Australia – and is the lead city for this region,” Mayor Pettitt said.

“I had the privilege of travelling to Hiroshima in 2014 where I visited the museum and spoke to survivors of the atomic bomb attack – it was a profoundly moving experience.

“It’s a great honour to be able to plant these gingko trees from Hiroshima in our Peace Grove as a reminder of the horrors of nuclear weapons and to help share a message of peace and friendship.”

Another six participating Mayors for Peace councils in Western Australia will also be planting gingko trees provided by the City of Fremantle.

Ginkgo biloba is considered the oldest tree on the planet, with some fossils dating back 270 million years.

The Hiroshima gingko seeds came from one of six trees growing between 1–2 kilometres from the 1945 atomic bomb explosion and were among the few living things in the area to survive the blast.

A plaque delivered from Hiroshima to explain the significance of the gingko trees will be unveiled at the Peace Grove on the International Day of Peace on Monday 21 September.