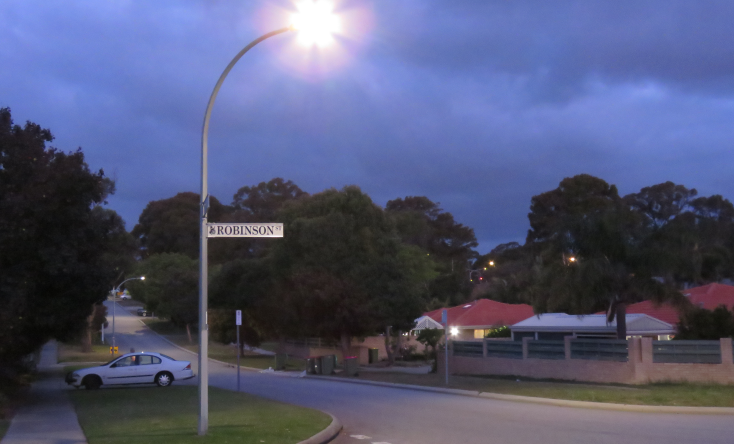 LED streetlights switched on in Freo

Streets in a large area of Fremantle are now safer and brighter following the replacement of more than 160 old streetlights with modern, energy-efficient LED lights.

The new lights have been installed in residential streets in the area around Frank Gibson Park, bounded by High Street, Carrington Street, Marmion Street and East Street, as well as the streets around Cantonment Hill and between Fremantle Park and Queen Victoria Street.

The new lights were installed by Western Power after Fremantle Council approved the allocation of $120,000 from a federal government Local Roads and Community Infrastructure grant for the project.

Fremantle Mayor Hannah Fitzhardinge said the council was keen to roll out LED streetlights across the city.

“The new LED streetlights will help to make the streets safer for pedestrians, cyclists and motorists, and they’re also a lot cheaper to run and maintain,” Mayor Fitzhardinge said.

“The new lights are brighter than the old ones, but the light is also softer and more consistent, so they won’t keep people awake at night.

“The City of Fremantle currently pays about $700,000 a year for the power and maintenance of our streetlights, so it’s a substantial cost for us and our ratepayers.

“The LED streetlights use far less energy and last about five times longer than ordinary lights, so these new lights will save us about $26,000 a year.

“And being more energy efficient means they’ll also save around almost 21,000 tonnes of carbon dioxide emissions per year.”

Streetlights in Hilton are also set to be replaced with LEDs as part of the Hilton Underground Power project.

The City of Fremantle has previously installed its own LED streetlights in areas such as Fremantle’s famous Cappuccino Strip.

The City is also using LED lights in all new projects including car parks and at sports facilities like Hilton Park and Gilbert Fraser Reserve, as well as in Walyalup Koort and the new Walyalup Civic Centre.