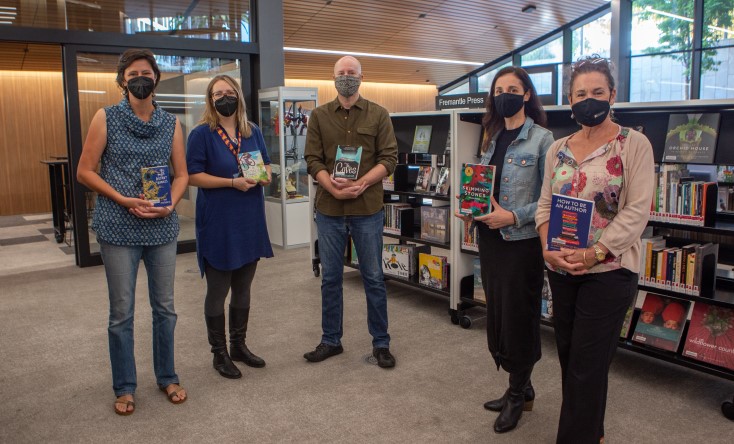 The library in the Walyalup Civic Centre has an entire shelf dedicated to Fremantle Press, with more than 300 titles available for loan.

The Fremantle Press collection includes both fiction and non-fiction, ranging from crime and historical novels to autobiographies, art and culture and children’s literature.

“It’s a testament to the vital role that Fremantle Press has played not only in Fremantle but also more broadly in the West Australian literary and cultural ecosystem,” Mr Whish-Wilson said.

“It's no exaggeration to say that if it weren't for the breadth and depth of Fremantle Press' curation and publishing of Western Australian stories, whether fictional or otherwise, there would be a huge hole in our knowledge and understanding of what this place means, and who we are as a people.

“I applaud the step taken by Fremantle Library to gather Fremantle Press' entire list and back-list in one place, and I, for one, will be eagerly perusing the shelves."

Fremantle Press Chief Executive Officer Jane Fraser said it was a buzz to see the entire list of titles available for the local community to borrow.

“The unveiling of the Fremantle Press shelf coincides, almost to the day, with the Press’ 46-year anniversary,” Ms Fraser said.

“This shelf represents so much to so many people: the writers who spent so many months bringing these unique stories to life, the publishers who transformed the manuscripts into books and the local readers who devoured them and who continue to love and champion local stories.

“We have always been a part of the Fremantle community and we hope library patrons will cherish this legacy as much as we do.”

The biennial award is state’s longest running and most prestigious award for an unpublished manuscript, with the winner receiving a cash prize of $15,000 from the City of Fremantle and a publishing contract with Fremantle Press.

Entries for the 2022 Hungerford Award are now closed. The winner will be announced at a special ceremony at Fremantle Arts Centre in October.

The City of Fremantle’s high-tech new library in the Walyalup Civic Centre is open Monday–Friday between 9am–7pm, and Saturday and Sunday between 9am–5pm.

For more information on the library’s services, including memberships, visit fremantle.wa.gov.au/fremantle-library.