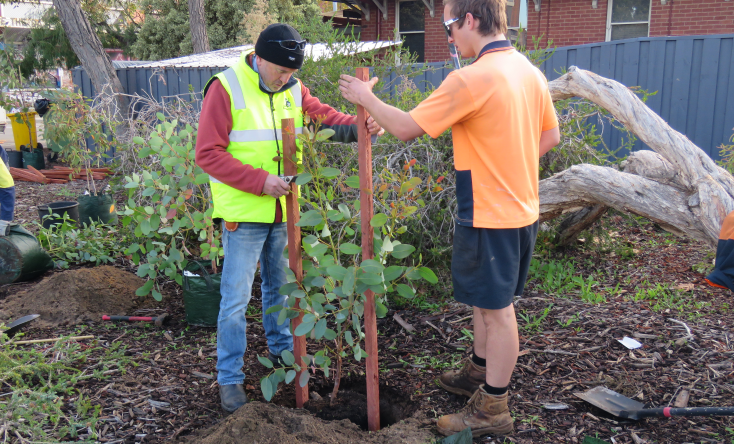 An additional 208 trees have been planted around the City of Fremantle thanks to a $16,500 Local Government Urban Canopy Grant.

The trees, consisting of 16 species of WA natives, have been planted by the City of Fremantle over the past month at Booyeembara Park, Princess May Park, Hollis Park, Rocky Bay Reserve, Port Beach, Leighton Beach and Tydeman Road.

“Having more trees not only makes our suburbs look better, it also makes them cooler and provides an important habitat for wildlife,” Mayor Fitzhardinge said.

“The City of Fremantle’s Urban Forest Plan was adopted in 2017 with the aim of planting an average of 1000 trees per year, to increase tree canopy cover to 20 per cent by 2027.

“Since the plan was adopted a total of 6748 trees have been planted across the city, beating the Urban Forest Plan targets by 2666.

“Last year the City planted another 1477 trees, exceeding the target in our Urban Forest Plan by 412.

“In 2022 our tree planting program will focus more on streets and parks, with the council resolving in April last year that a minimum of 80 per cent of the trees in the Urban Forest Plan target be planted in streets, parks and other urban areas.

“We greatly appreciate the support of the Water Corporation and WALGA in making our suburbs cooler and greener places to live.”

The 208 trees planted through the Local Government Urban Canopy Grant are in addition to the more than 650 trees being planted this winter as part of the City of Fremantle’s tree planting program.

The trees being planted consist of more than 40 individual species, predominately Western Australian and Australian natives.

The City received hundreds of requests for new street trees this year, but due to limited stock a small number will have to be deferred until the 2023 planting season.

At any time of year Fremantle residents can apply to have a street tree planted on their verge at no cost to the property owner.

Once an application for street tree has been received by our Parks and Landscape team, they will undertake an inspection of your verge by April and contact you about what type of tree is most suitable. Planting will occur between May and August to ensure the tree has the best chance of survival.