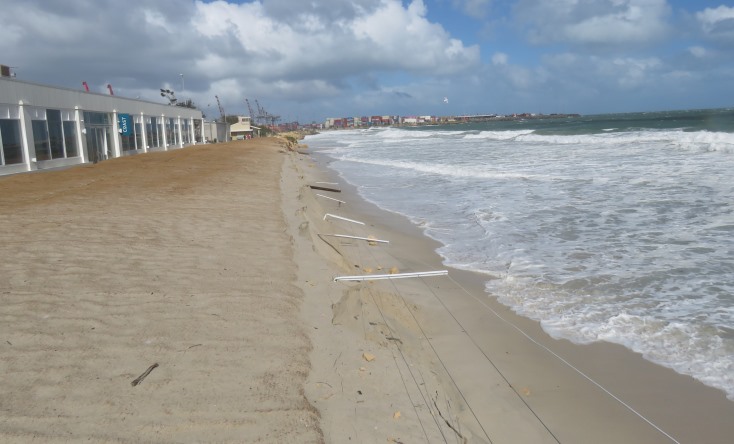 The temporary rock wall constructed by the City of Fremantle to protect coastal assets at Port Beach from erosion has passed its first big test.

The metropolitan coast was pounded by heavy seas and wind gusts of more than 100kph in overnight storms.

“The first big storm of the season is usually the one that causes the most erosion damage and, despite the intensity of last night’s storm, all the buildings at Port Beach like the change rooms, surf club annex and Coast restaurant are all perfectly fine,” Mr Tattersall said.

“There is a section of the post and wire fence that we built in front of the new wall to stop people from climbing on it that has come down, but we always expected that would happen and it’s easy to repair.

“There is also a small section to the south of the buildings that wasn’t protected by any rock walls that has suffered some erosion damage, but that just goes to illustrate what may have happened further up the beach if the new erosion defences weren’t there.”

The state government committed $200,000 towards the project.

The works involved digging into the existing dune, installing a geotextile membrane, construction of the wall, and the restoration of the dune in front and on top of the wall to maximise beach area.

The restored dune was then covered with hessian matting to prevent sand from blowing away, with plans to revegetate the dune in the coming months.

A report by coastal engineering experts received by Fremantle Council last year provided a number of potential management options which are now being reviewed.

Beyond 2040 the Fremantle Council has adopted managed retreat as its preferred long-term strategy, in which all City assets such as the car parks and change rooms will eventually be removed from the erosion risk zone and set further back.