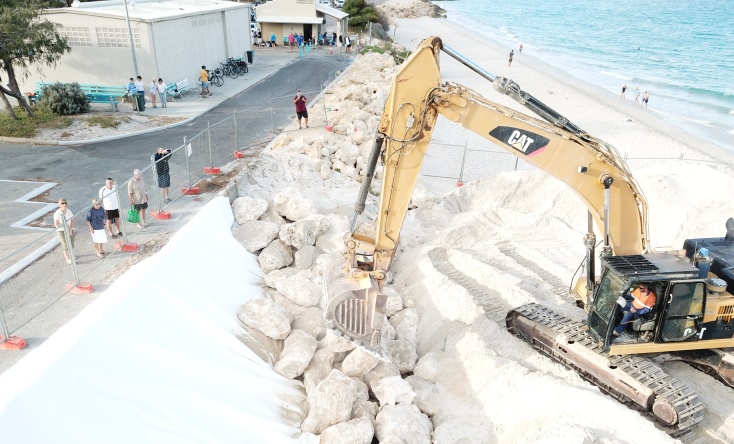 Works to construct a temporary rock wall to protect coastal assets at Port Beach from erosion are underway.

In December last year Fremantle Council approved the construction of a rock wall as the preferred interim measure to protect facilities including the change rooms, surf club annex and the Coast Port Beach restaurant from coastal erosion.

A state government commitment of $200,000 towards the project was announced in January.

The works will involve digging into the existing dune, installation of a geotextile membrane and construction of the rock wall, and the restoration of the dune in front and on top of the wall to maximise beach area.

The project is expected to be completed in early April, ahead of the first winter storms that generally cause the most significant erosion damage.

Fremantle Mayor Brad Pettitt said the rock wall was a short term measure to provide immediate protection to assets at the beach while longer term options are being investigated.

“The City of Fremantle has been working with Fremantle Ports and other government agencies for a number of years to assess the risk and come up with appropriate ways to manage erosion at Port Beach,” Mayor Pettitt said.

“Last year the council received a report from coastal engineering experts that provided a number of potential management options ranging from depositing large quantities of sand onto the beach through to engineering solutions like groynes, headlands and seawalls.

“All of these options have their pros and cons, so we are now working through them very carefully with a view to finalising a plan to manage erosion at the beach for the next 20 years.

“Ultimately though, for beyond 2040 the council has adopted managed retreat as its preferred long-term strategy, in which all City assets such as the car parks and change rooms will eventually be removed from the erosion risk zone.”

In response to the erosion incident last year the City of Fremantle put in place interim protection measures by constructing a temporary rock wall in front of the change rooms and placing large quantities of beach sand on the dune in front of the Coast restaurant.