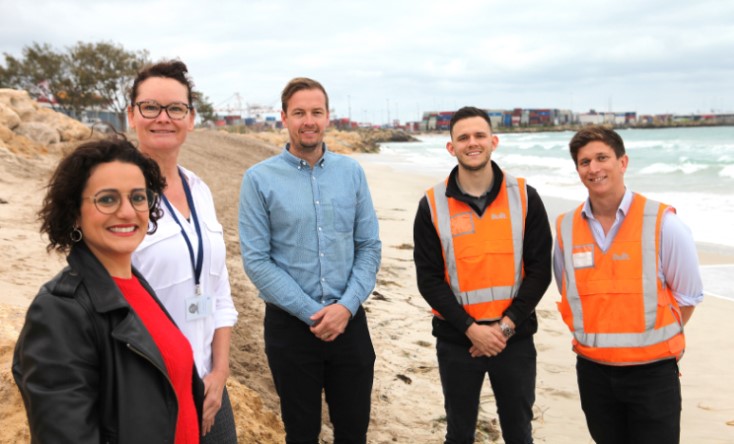 Works by the City of Fremantle to restore Port Beach and reopen access paths in preparation for summer have been completed.

The works involved screening more than 3000 cubic metres of sand to remove any small rocks before spreading it at vulnerable locations that were severely eroded during storms earlier this winter.

The sand was donated from a nearby development site at Leighton by national construction company Built.

Built Project Manager Sam Heinemann said the company was happy to assist in restoring the beach.

“We were delighted to donate the sand to the City of Fremantle as a win-win for the community and as part of our sustainability commitment to recycle or reuse 90 per cent of construction waste on our sites,” Mr Heinemann said.

The donated sand was placed in front of the eroded section of the southern car park which was damaged during severe storms in May, as well as in front of the change rooms and surf club annex. Additional sand was also placed at Sandtrax Beach immediately south of the car park.

The works also included the reinstatement of a number of beach access paths that were washed out in the storms earlier this year and maintenance on the rock walls that were installed in 2018 and 2019.

An additional 165 tonnes of rock were also brought in to provide additional protection to the surf club annex.

The project was partly funded by the state government with a matching contribution from the City of Fremantle, and is separate from a recent state government commitment to help address erosion at Port Beach.

Last month Transport and Planning Minister Rita Saffioti announced $3.25 million would be allocated to a large scale sand nourishment project to provide up to 10 years of protection at Port Beach.

Sand nourishment via dredge was the highest ranked option identified in the Port Beach Coastal Adaptation Options Report released by the City of Fremantle last year.

Detailed investigations into the sand nourishment option are currently being completed and a report is expected to be presented to Fremantle Council for consideration in October or November.

Fremantle Council has adopted managed retreat as its preferred long-term strategy managing coastal erosion, in which all City assets such as the car parks and change rooms will eventually be removed from the erosion risk zone and set further back.