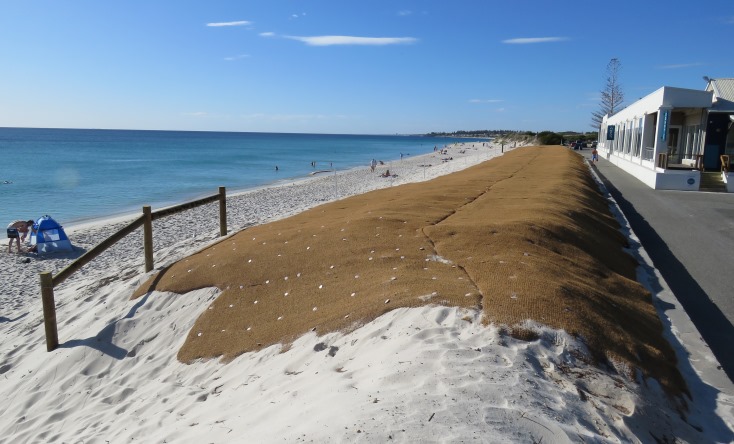 The City of Fremantle has completed the construction of a temporary rock wall to protect coastal assets at Port Beach from erosion.

The state government committed $200,000 towards the project.

The works involved digging into the existing dune, installing a geotextile membrane, construction of the wall, and the restoration of the dune in front and on top of the wall to maximise beach area.

The restored dune has been covered with hessian matting to prevent sand from blowing away in the short term. Work to revegetate the dune will be carried out in May and June.

Fremantle Mayor Brad Pettitt said it was good to have the erosion defences in place ahead of the first winter storms.

“The first big storm of the winter is generally the one that causes the most erosion damage so it was really important to get this work done to avoid a repeat of last year, when assets like the change rooms and Coast restaurant were at serious risk,” Mayor Pettitt said.

“Now that these protection measures are in place we can continue to work with Fremantle Ports and other government agencies to examine options for managing erosion at Port Beach for the next 20 years or so.

“Ultimately though, for beyond 2040 the council has adopted managed retreat as its preferred long-term strategy, in which all City assets such as the car parks and change rooms will eventually be removed from the erosion risk zone and set further back.”

A report by coastal engineering experts received by Fremantle Council last year provided a number of potential management options which are now being reviewed and developed by officers, consultants and key stakeholders.