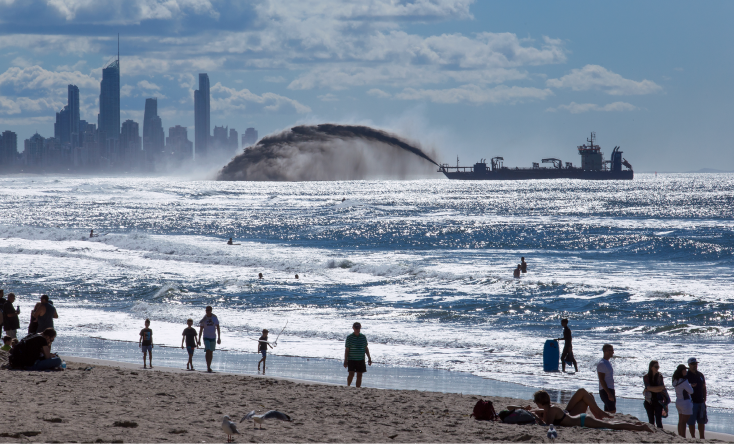 A project to combat coastal erosion by depositing thousands of cubic metres of sand at Fremantle’s Port Beach will commence in the coming weeks.

The Port Beach Sand Nourishment Project will see up to 150,000m3 of sand dredged from Fremantle Port’s Deep Water Channel and ‘rainbowed’ onto the beach.

Rainbowing involves the pumping of a mixture of dredged sand and water through a hose with a nozzle, into a high arc through the air and onto the nearshore area.

Subject to final safety plans being approved, an initial placement volume of around 30,000m3 of sand is expected to be placed on the beach over a two-week period, with the remaining up to 120,000m3 to be placed during 2023. The works schedule may vary depending on weather conditions.

The project is being delivered as a partnership project by the City of Fremantle, Fremantle Ports and the Department of Transport using $3.25 million in WA Recovery Plan funding from the state government.

“In a report released by the state government in 2019 Port Beach topped the list of WA’s coastal erosion hotspots,” Mayor Fitzhardinge said.

“The design of the Port Beach sand nourishment program has been developed to provide a wide enough beach so that, with the anticipated movement of the placed sand, there will still be a sufficient buffer against the erosion caused by severe storms.

“We’re very glad to be able to partner with the state government to deliver this project for a beach that is highly valued by locals and visitors alike.”

“I’m proud to see work will soon be underway on this significant project following the state government’s announcement of $3.25 million towards sand nourishment in 2020,” Ms O’Malley said.

“We will continue to work in partnership with the City of Fremantle and the local community to protect our much-loved beach, now and into the future.”

Fremantle Ports CEO Michael Parker said while protection of the beach for the public was paramount, the sand renourishment had operational advantages as well in terms of maintenance of the shipping channel’s depth and ensuring a buffer for the critical Port Beach Road access to Rous Head.

The present pattern is for eroded sand from Port Beach to be transported to the north and deposited near Leighton Beach. In a bad year Port Beach can lose up to 40,000m3 of sand, however the average annual loss is around 15,000m3.

The works are intended to provide protection for up to ten years, although the actual life of the works will ultimately depend on the weather conditions experienced over the next decade.

Some of the placed sand is expected to migrate northwards over time. A shoreline monitoring program will be implemented to track the movement of the placed sand, and if significant movement occurs additional maintenance or nourishment works may be required.

Sand nourishment via dredging was selected over other potential coastal erosion adaptation options based on the investigations and recommendations of coastal engineering experts in 2019.

The sand nourishment project will address the current extreme erosion risk level while allowing time for a longer-term planning process to enable the implementation of a managed retreat strategy, that includes the establishment of a broader foreshore reserve to retain a beach and amenities for the community.

An environmental impact assessment determined the potential impacts of the dredging and sand nourishment works were expected to be minor. The Environmental Protection Agency also reviewed the project and concluded the likely environmental effects of the proposal were not so significant as to warrant formal assessment.

Water quality monitoring and light monitoring will occur throughout the works program.

It’s likely that as ‘wet’ sand is deposited, odour may be generated. This is expected to dissipate relatively quickly.

Sand placed on the beach may first appear darker than the existing beach, but this is expected to fade over time.

Dredging and nourishment works will be planned around periods of high tide, so there will likely be some works occurring at night.

The dredging and rainbowing works are not expected to impact access to facilities such as parking, change rooms, the Surf Life Saving Facility and commercial food and beverage outlets.