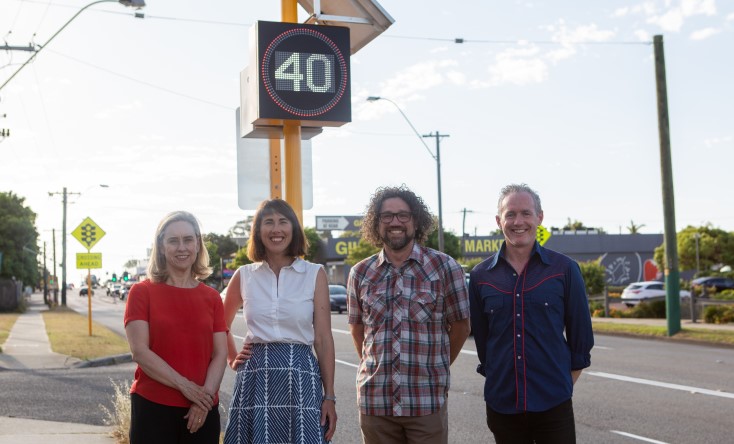 Slow down in Hilton town centre

In a major win for pedestrian safety, variable speed signs have been installed in the Hilton town centre to reduce the speed limit to 40 kilometres per hour. ​

The stretch of South Street through the Hilton town centre between Carrington Street and Lee Avenue is a notorious accident hotspot, particularly the signalised crossing that allows pedestrians to get from one side of South Street to the other.

The new variable speed signs, ​commissioned last week, reduce the speed limit along South Street from 60km/h to 40km/h from 7.30am to 10pm, seven days a week.

​“The safety of people using that crossing, including many children and elderly people, has been a huge concern for the City of Fremantle and Hilton residents for a long time,” Cr Mofflin said.

“In the past five years there have been a number of incidents that have left pedestrians with serious injuries, and many more near misses.

“Back in 2018 the City did some terrific upgrades in the Hilton town centre to create a more attractive and inviting space, but cars running the red light at the crossing continued to be a problem.

“A traffic survey the City conducted in December 2019 showed an average of 24 vehicles per day were endangering the lives of pedestrians and other road users by failing to stop on the red signal.

“There’s been a lot of effort from Hilton councillors and the local community over a number of years to improve this crossing.

“We’re delighted that Main Roads has now installed these new variable speed signs, and we’re very grateful to our local member Simone McGurk for her support in securing this excellent outcome.”

Fremantle MLA Simone McGurk said she advocated for safety improvements after several constituents shared their concerns with her.

“The new speed signs complement other state government funded initiatives in Hilton such as junction, landscaping and placemaking improvements. These have made the town centre safer, more user-friendly, and attractive,” Ms McGurk said.

“I am very pleased with this outcome for the Hilton community.”

The upgrade to the Hilton town centre in 2018 was funded by the City of Fremantle and the state government through the Local Projects, Local Jobs program.

The improvements addressed a serious safety issue by preventing cars from turning right out of Paget Street and Victor Street onto South Street.

They also included enhanced signage and lighting, new ramps at Paget Street and Victor Street to make it easier for people with prams and wheelchairs, a different colour asphalt roadway to delineate Hilton town centre and new landscaping and street furniture inspired by a Hilton garden suburb theme.