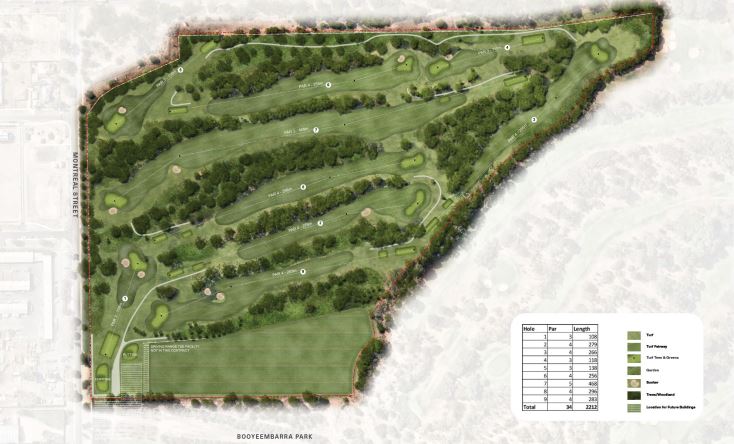 The City of Fremantle has unveiled an updated layout for the revamped Fremantle Public Golf Course.

The course redesign, which is required to make room for the Main Roads WA High Street upgrade, includes three completely new holes, the introduction of a par 5 hole, the replacement of all tees and greens and new bunkering scenarios.

As a result of the extent of the required works, the new course design will also include a renewed irrigation system, new cart paths and renewed course furniture.

Aspect Studios Director Tom Griffiths said the new design would be a significant improvement in a number of areas while maintaining the unique qualities of the old course.

“The critical goals with the redevelopment are to maintain the 34-par card, take the opportunity to greatly enhance the greens and tees, have minimal impact of the natural landscape and trees, and retain the unique character of the challenging aspects of the narrow fairways,” Mr Griffiths said.

“For the most part the existing fairways have been retained, playing either as is or in the opposite direction.

“Also the significant emotional attachment that many current players have with the signature ninth hole has seen this retained and enhanced with an enlarged finishing green.

“Following a very comprehensive and stimulating design process, it’s felt that the proposed solution is going to create a redeveloped course that will only add to its current reputation as a challenging, enjoyable and scenic golfing and social experience.”

Project manager Mal Birch said new layout would offer a fun and interesting challenge for golfers, despite it being slightly shorter than the old course.

“The old course was a golfing experience that required accuracy, good club selection and skill over brute force, so the slight reduction in length will in no way diminish that experience,” Mr Birch said.

“The par three holes will now provide varying lengths, as do the par fours, whereas previously there were more holes of similar dimensions.

“Added to this the course now has a genuine par 5 for the first time which will markedly enhance the playing interest, particularly for those many people for whom the course has been a part of their sporting and social lives for many years.

“But without doubt the greatest change is the introduction of a complete new set of greens and tees.

“The general dissatisfaction with the existing greens was that they were mostly too small, so the redevelopment has provided the opportunity to introduce larger greens that deliver a far greater variety of pin locations, along with a number that are either undulating or have seen the introduction of two plateaus within the overall putting area.”

The redesign of the golf course is required to make way for the Main Roads WA upgrade of High Street, which will result in the loss of the existing third and sixth holes.

As part of the High Street project Main Roads will fund a program of accommodation works including the reconfiguration of the golf course and the construction of a replacement club house.

The official opening of the new course with temporary club house facilities is scheduled for May 2021.

A preliminary design for the combined new club house and community facility is expected to be presented to Fremantle Council next month, followed by further community consultation.

The final location and orientation of the new club house may lead to further refinement of the location of the first tee and the practise chipping and putting greens.

Construction of the club house is scheduled to take place between March 2021 and January 2022.