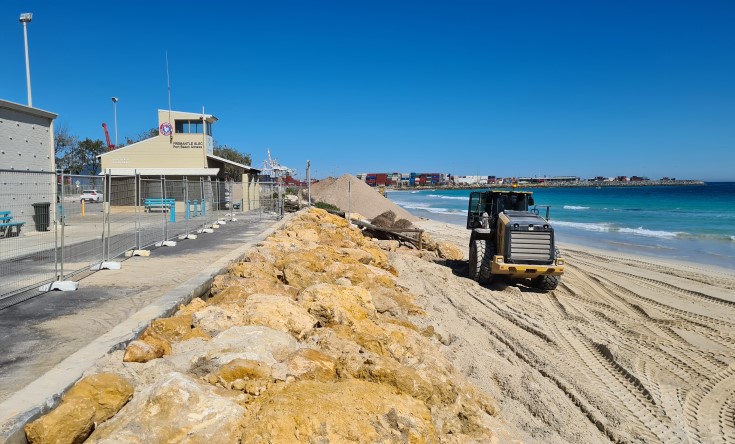 The City of Fremantle is preparing to put an initial 30,000 cubic metres of sand along Port Beach in the first stage of a major project to protect the beach from coastal erosion.

The sand, which is enough to cover Fremantle Oval to a depth of almost 1.6 metres, is scheduled to be deposited on the beach in August to avoid the seagrass growing season.

With winter approaching, the City has been working with project partners Fremantle Ports and the Department of Transport, as well as project management and environmental approvals consultants, to protect Port Beach from erosion.

This follows the construction of a rock wall last year to protect facilities including the change rooms, surf club annex and the Coast Port Beach restaurant.

Deputy Mayor Andrew Sullivan said while the rock wall would continue to provide protection over winter, the sand nourishment project would be a further measure to address erosion in the short to medium term.

The state government last year announced $3.25 million through the WA Recovery Plan would be provided for sand nourishment works to support the action already taken by the City and other agencies to protect the coast over a 10-year period.

This will include the placement of up to 150,000 cubic metres of sand over the next two years.

“A project team has been working with state agencies to plan the works which are being timed towards August when it will have the least disruptive impact on beach users and produce the minimum impact to the seagrass beds along the coast that are in a dormant growth phase at this time,” Cr Sullivan said.

“Timing of the sand placement is very important to ensure it provides the best possible chance of success.

“We are confident that our existing measures will provide a suitable protective barrier for this winter, and this first phase of sand nourishment will provide an important grounding for the bigger project next year.”

The works include dredging, placement of the sand, removal of small rocks and granite boulders from the beach as well as dune stabilisation and access paths.

Cr Sullivan said the City would continue to work with its project partners as well beach users and business operators to protect Port Beach and the coastal frontage while also looking ahead to longer term solutions.

Fremantle Council has adopted a preferred long-term strategy known as ‘managed retreat’ in which all of the beach infrastructure, including car parks, change rooms, clubrooms and cafes, will be rebuilt well behind the erosion risk zone as was achieved at Leighton Beach.

“The managed retreat strategy requires the state government to set aside a much wider foreshore reserve at least 200 metres wide as this is the only way to guarantee long uninterrupted stretches of white sand beaches that our community expect at Port and Leighton beaches,” Cr Sullivan said.