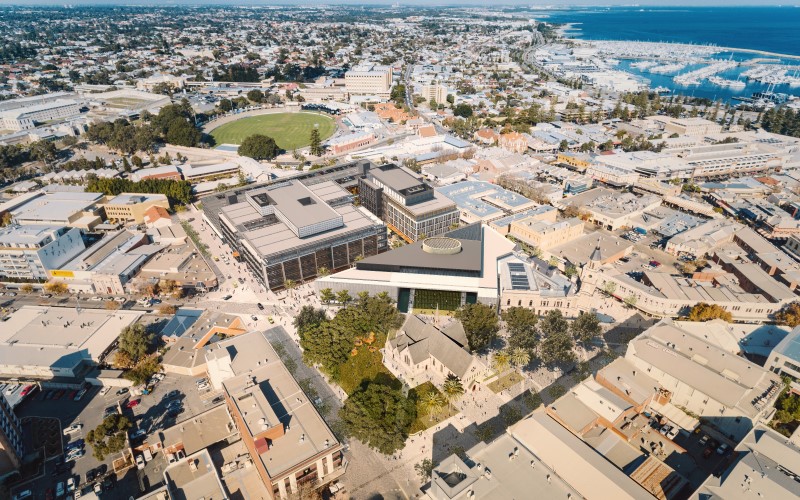 At $270m it’s by far the biggest project ever undertaken by a Fremantle Council and is up there as one of the most important developments in Fremantle’s history.

This once-in-a-generation project will see central Fremantle transformed into a vibrant civic, community and commercial hub in coming years.

The project will create more than 2,100 new local jobs for Fremantle once operational – injecting $358m into the local economy.

The project will redefine Walyalup Koort (formerly Kings Square) as the true heart of Freo and above all will become a more attractive place for people.

It means more workers, more activity during the working week, more people that may move to Fremantle to be closer to work in the city centre, more shops, more money for the local economy, more indirect jobs created, more community events, improved community safety and a better reputation for Fremantle. With more activity, the city centre will be a better place to live in, work in and visit.

It will also be a catalyst for more investment in Freo – the more people that want to visit, live and work in Freo, the more attractive it becomes to open new businesses and build new housing options.

It’s a game changing project for Fremantle which will deliver:

We are committed to the completion of the Walyalup Civic Centre as an integral part of the Kings Square Renewal project.

The contracted builder Pindan Group was placed into administration in May however subcontractors working on the project are guaranteed payment thanks to the inclusion of a Project Bank Account as a key condition of the construction contract.

Council voted to change the name of Kings Square to Walyalup Koort – a Whadjuk Nyoongar name meaning ‘Heart of Fremantle’.

The decision was made following an extensive community engagement process which found Walyalup Koort was the clear preference among Fremantle’s Traditional Owners and the broader community.

The new name is focused on how we've evolved as a community in Fremantle and what we want to achieve moving forward. The name was officially approved by Landgate on Tuesday 22 June 2021.