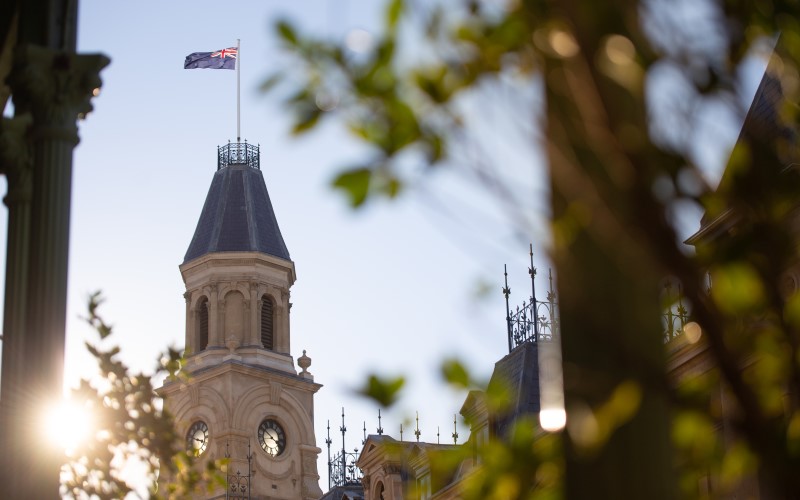 The monumental $3.1m restoration project, which began in May 2016, has seen the heritage building’s exterior restored to its original condition - much as it looked 130 years ago in 1887 when first unveiled.

Works have included major structural repairs, a new slate roof with improved drainage and the refurbishment of the clock, which was taken apart to be cleaned and serviced.

Problems were originally caused by inappropriate surface treatments and repairs to masonry elements carried out in the 1950s - 60s, when there was little understanding of how to conserve traditional building fabric.

These have been addressed to prevent ongoing deterioration of masonry, embedded steel and timbers and decorative stucco work.

Reinstatement of the spectacular slate roofs with cast iron finials together with the removal of paint on the facades to reveal the original stucco finish of the town hall has enhanced the presentation and character of the Kings Square Precinct.

Conservation of the external shell of the Fremantle Town Hall has paved the way for future refurbishment of the interior of the building that will be undertaken in conjunction with the construction of the future library and civic administration building.

The City’s program of works followed the guidelines set out in the nationally recognised ICOMOS Burra Charter for heritage conservation and the recommendations of the Fremantle Town Hall Conservation Plan (1985/ 2004) by Considine and Griffiths Architects.

Click here to find out why paint causes the deterioration of historic buildings.

The Fremantle Town Hall was constructed in 1887. This exuberantly composed two storey stuccoed limestone and brick building was designed by the architects Grainger and D'Ebro in the Victorian Free Classical style and features a 32 metre high clock tower and a picturesque roofscape of turrets and mansard roofs.

Over the last 128 years the Fremantle Town Hall has under gone a number of changes and refurbishments but the building, and in particular the exterior, has remained largely intact.

The major changes that have occurred to the exterior are the:

In 1993 the Fremantle Town Hall was permanently included on the State Register of Heritage Places (Place No. 01015).

The primary document to guide the conservation and management of the place is the Fremantle Town Hall Conservation Plan that was prepared in 2004 by Considine and Griffiths Architects Pty Ltd with Robin Chinnery Historian. This updated an earlier plan from 1985.