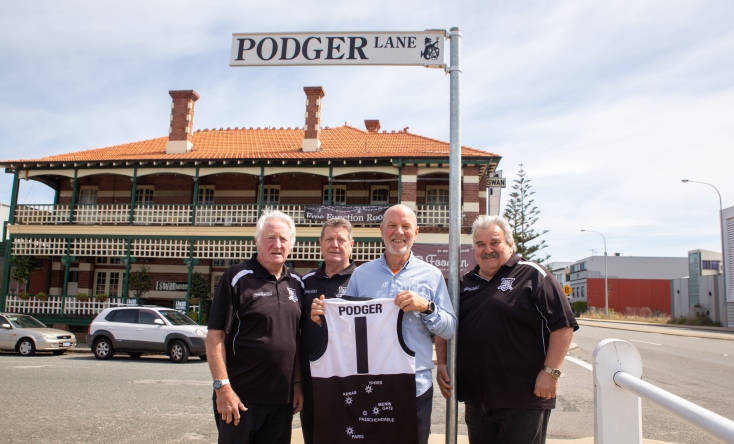 3 months ago in Community , Media release

A North Fremantle football player killed on the Western Front in the First World War has had a street named in his honour.

Samuel Podger played for the North Fremantle Football Club and was living on Ellen Street in Fremantle when he enlisted in the First Australian Imperial Force in 1915.

He was assigned to the 51st Battalion and fought with them in France until he was killed in action at Flers in the Somme valley on the 13 February 1917.

Earlier this year the Fremantle Council recommended a laneway next to the Swan Hotel in North Fremantle, which was formerly part of Swan Street, be renamed Podger Lane. The state government’s Geographic Names Committee approved the change in July.

North Fremantle Football Club President Tony Misich said it was important to the club to honour past players and keep alive the memory of its fallen heroes.

“The First World War had a massive impact on the North Fremantle Football Club, as it did with the whole community,” Mr Misich said.

“At least 43 North Fremantle football players volunteered to fight and 13 of them were killed, which was more than any other WA league football club.

“In fact, our founding club had to fold because so many players and officials went to the war and were either killed, wounded or gassed.

“As well as playing for the footy club Sam Podger worked as a shunter on the railways in Fremantle, so it’s fitting that this lane next to the railway line has been named in his honour.

“It’s a great way to show his family and descendants how much the football club and the rest of the North Fremantle community cherish his memory.”

Samuel Podger disembarked with the 51st Battalion in Marseilles on 12 June 1916. While fighting near Pozieres on 9 September 1916 he was wounded by an exploding shell and was found by some Canadian soldiers buried and unconscious.

After a long period of recovery he rejoined his unit on 7 February 1917 and was killed in action just six days later.

To mark the 90th anniversary of the end of the First World War and the 150th year of Australian football the club identified the gravesite or memorial of every North Fremantle footballer on the Western Front and held memorial services at each one in 2008.

The club also created commemorative jumpers bearing the names of the fallen players.

To learn more about Samuel Podger and other men from Fremantle who served in the First World War visit the Anzac Fremantle website.