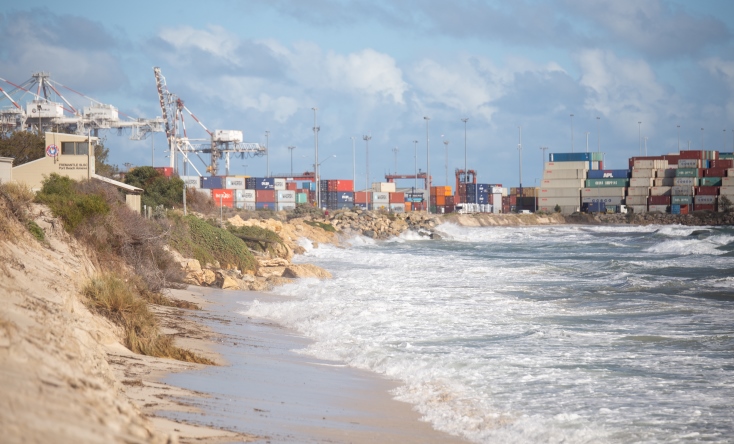 The City of Fremantle has welcomed the state government’s commitment to help fund the construction of a temporary rock wall to protect coastal assets at Port Beach.

Last month Fremantle Council approved the construction of a rock wall as the preferred interim measure to protect facilities including the change rooms, surf club annex and Coast Café from coastal erosion.

This approval was subject to a formal commitment to jointly fund the rock wall by the state government, and approval of a capital budget in the City of Fremantle’s 2019/20 mid-year financial review.

This morning Transport Minister Rita Saffioti announced the state government would contribute $200,000 towards the project.

Fremantle Mayor Brad Pettitt said the government’s commitment would help to buy some time while a longer term solution to coastal erosion at Port Beach was developed.

“We envisage the rock wall will adjoin the existing wall in front of the change rooms and extend about 110 metres to the north in front of Coast Café, with beach access paths included where possible,” Mayor Pettitt said.

“The project will require the removal of the existing dune, construction of the rock wall and replacement of the dune in front and on top of the wall to maximise beach area.

“Our aim is to have the rock wall in place by May, before the first winter storms that generally cause the most significant erosion damage.

“While the rock wall is an immediate response to the erosion threat, we are also developing longer term coastal adaptation measures with the ultimate aim of relocating public assets, including car parks and change rooms, away from the erosion risk zone.”

In May 2018 a severe erosion incident undermined the southern car park at the beach, while in June last year another serious erosion incident threatened facilities like the change rooms, surf club annex and the Coast Café.

In response to the erosion incident this year the City of Fremantle put in place interim protection measures by constructing a temporary rock wall in front of the change rooms and placing large quantities of beach sand on the dune in front of the Coast Café.